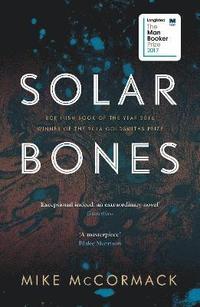 Longlisted for the Man Booker Prize 2017

av Mike McCormack
Häftad Engelska, 2017-05-04
119
Köp
Spara som favorit
Skickas inom 3-6 vardagar.
Fri frakt inom Sverige för privatpersoner.
WINNER OF THE INTERNATIONAL DUBLIN LITERARY AWARD WINNER OF THE GOLDSMITHS PRIZE LONGLISTED FOR THE MAN BOOKER PRIZE BGE IRISH BOOK OF THE YEAR 2016 Marcus Conway has come a long way to stand in the kitchen of his home and remember the rhythms and routines of his life. Considering with his engineer's mind how things are constructed - bridges, banking systems, marriages - and how they may come apart. Mike McCormack captures with tenderness and feeling, in continuous, flowing prose, a whole life, suspended in a single hour.
Visa hela texten

Excellence is always rare and often unexpected: we don't necessarily expect masterpieces even from the great. Mike McCormack's Solar Bones is exceptional indeed: an extraordinary novel by a writer not yet famous but surely destined to be acclaimed by anyone who believes that the novel is not dead * * Guardian * * Pure enchantment from an otherworldly talent. I admired the hell out of this book -- ELEANOR CATTON, Man Booker Prize-winning author of THE LUMINARIES Wonderfully original, distinctly contemporary . . . delivered in lucid, lyrical prose . . . A pleasure to read * * New York Times * * McCormack has always been among the most adventurous and ambitious Irish writers. Solar Bones, written in one single sonorous sentence, tells the story of a family in contemporary Ireland -- COLM TOIBIN The writing catches fire as we draw near to the void, pass over into death itself, and therein confront the truth that even in a fallen universe, when all distractions tumble away, the only adequate response to our being is astonishment * * Irish Times * * Exhilarating -- LISA McINERNEY Hauntingly sad, but also frequently very funny - Proust reconfigured by Flann O'Brien -- Literary Review Beautiful . . . Compulsive * * The Times * * This is prose that reads as if it is being thought . . . reduced me to tears * * New Statesman * * A masterpiece -- Blake Morrison With stylistic gusto, and in rare, spare, precise and poetic prose, Mike McCormack gets to the music of what is happening all around us. One of the best novels of the year -- COLUM McCANN On every page, a celebration of the everyday, the odd, the incidental -- SARA BAUME McCormack is one of our bravest and most innovative writers - he shoots for the stars with this one and does not fall short -- KEVIN BARRY

Mike McCormack is an award-winning novelist and short story writer from Mayo. His previous work includes Getting it in the Head (1996), Notes from a Coma (2005), which was shortlisted for BGE Irish Novel of the Year, and Forensic Songs (2012). In 1996 he was awarded the Rooney Prize for Irish Literature for Getting it in the Head and in 2007 he was awarded a Civitella Ranieri Fellowship. In 2016, Solar Bones won the Goldsmiths Prize and was BGE Irish Book of the Year, was longlisted for the Man Booker prize in 2017 and won the International Dublin Literary Award in 2018.