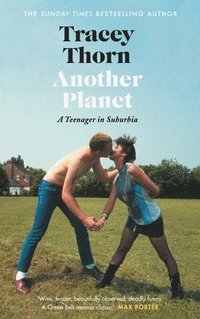 A Teenager in Suburbia

av Tracey Thorn
Inbunden Engelska, 2019-02-07
169
Köp
Spara som favorit
Skickas inom 7-10 vardagar.
Fri frakt inom Sverige för privatpersoner.
Finns även som
Visa alla 2 format & utgåvor
A SUNDAY TIMES TOP TEN BESTSELLER SHORTLISTED FOR THE PENDERYN MUSIC BOOK PRIZE In a 1970s commuter town, Tracey Thorn's teenage life was forged from what failed to happen. Her diaries were packed with entries about not buying things, not going to the disco, the school coach not arriving. Before she became an acclaimed musician and writer, Tracey Thorn was a typical teenager: bored and cynical, despairing of her aspirational parents. Her only comfort came from house parties, Meaningful Conversations and the female pop icons who hinted at a new kind of living. Returning more than three decades later to Brookmans Park, scene of her childhood, Thorn takes us beyond the bus shelters and pub car parks, the utopian cul-de-sacs, the train to Potters Bar and the weekly discos, to the parents who wanted so much for their children, the children who wanted none of it. With endearing wit and great insight, Thorn reconsiders the Green Belt post-war dream so many artists have mocked, and yet so many artists have come from.
Visa hela texten

A beautiful writer . . . Exceptional . . . Made me catch my breath . . . Her language is straightforward, chatty, easy-to-read. Musical. Though Thorn tells us sharp truths, we gobble them up because she delivers them in such a deceptively pretty, poignant way -- Miranda Sawyer * * Financial Times * * When Thorn digs into her adolescence, the book sparks with wit and poignancy, helped by extracts from her teenage diaries that she smartly exploits for comedy and bathos * * Sunday Times * * Readers of Thorn's two previous memoirs will recognise the tone of this book, with its beautifully clean style, careful self-questioning and pervasive likability * * Guardian * * Tender, wise and funny * * Sunday Express * * I adored this. Wise, tender, beautifully observed, deadly funny. A Green Belt memoir classic -- MAX PORTER Tracey Thorn's memoir of growing up in suburbia finds the extraordinary in the ordinary . . . Thorn is a writer who can "give the mundane its beautiful due" . . . [A] delightful, incisive memoir -- Frank Cottrell-Boyce * * New Statesman * * What a wise and funny book. Nostalgic but unsentimental, Thorn beautifully captures the aspirations, ennui and angst of suburban teenage life. I loved it -- DAVID NICHOLLS Another Planet is about being a teenager in suburbia in the 1970s, and revisiting one's own youth from middle age. It touches on class, culture, music, plum jam and parenting teens. It's wonderful. You'll read it in one go -- NINA STIBBE A thoughtful guide to the Seventies as [Thorn] muses on her teenage years in rural Hertfordshire * * Daily Mail * * This tender-hearted, tough-minded book seems set to revivify a genre that can too often be self-deluding and thus pointless . . . She's a brilliant writer * * Spectator * *

Tracey Thorn is a singer-songwriter and writer, best known for her seventeen years in bestselling duo Everything But The Girl. She grew up as the youngest of three children in Brookmans Park, Hatfield, Hertfordshire, where she learned the piano, enjoyed underaged drinking, and started her first band while still at school. Since then, she has released four solo albums, one movie soundtrack, a large handful of singles and two books, including the Sunday Times bestselling memoir, Bedsit Disco Queen, and currently writes a column for the New Statesman. She lives in London, with her husband Ben Watt and their three children. @tracey_thorn | traceythorn.com