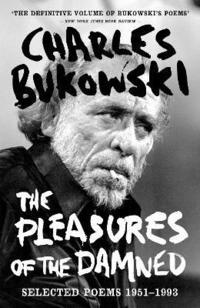 The Pleasures of the Damned

av Charles Bukowski
(1 röst)  |  Läs 1 recension
Häftad Engelska, 2018-07-05
180
Köp
Spara som favorit
THE BEST OF THE BEST OF BUKOWSKI The Pleasures of the Damned is a selection of the best poetry from America's most iconic and imitated poet, Charles Bukowski. Celebrating the full range of the poet's extraordinary sensibility and his uncompromising linguistic brilliance, these poems cover a lifetime of experience, from his renegade early work to never-before-collected poems penned during the final days before his death. The Pleasures of the Damned is an astonishing poetic treasure trove, essential reading for both long-time fans and those just discovering this unique and important American voice.
Visa hela texten

Likely to stand as the definitive volume of Bukowski's poems * * New York Times Book Review * * He brought everybody down to earth, even the angels -- LEONARD COHEN The best poet in America -- JEAN GENET A laureate of American low life * * Time * * Bukowski wrote poetry as minimal as a bullet. He could be funny and heartbreaking in the same sentence * * Sunday Herald * * This bulbous collection contains a frankly astonishing amount of poems - it's a paperback of such great dimensions that it could be wood-paneled and used as a small bar * * Dazed and Confused * * Extraordinary: unsentimental, vigorous and profound * * Good Book Guide * *

Charles Bukowski is one of America's best-known contemporary writers of poetry and prose, and, many would claim, its most influential and imitated poet. At the forefront of American counter-culture, his Beat Generation writing is widely celebrated. He was born in Germany in 1920 to an American soldier father and a German mother and was brought to the United States at the age of three. He grew up in Los Angeles and lived there for the majority of his life. During his lifetime he published more than forty-five books, including novels such as Factotum, Post Office and Ham on Rye. He died in 1994 shortly after completing his last novel, Pulp.