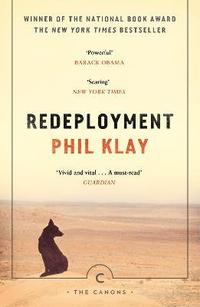 av Phil Klay
Häftad Engelska, 2020-10-29
119
Köp
Spara som favorit
Finns även som
Visa alla 2 format & utgåvor
'Powerful' Barack Obama 'Searing' New York Times How do you comfort a man who has just lost his best friend? How does it feel to see fear in your wife's eyes? What does it mean to come home? In one of the most acclaimed and celebrated collections of stories for years, Redeployment takes readers to the frontlines of the wars in Iraq, asking us to understand what happened there, and what happened to the soldiers who returned.
Visa hela texten

Redeployment is a quick but powerful and, for me, painful set of stories about the experience of ordinary soldiers in Iraq -- BARACK OBAMA Searing . . . Gives the civilian reader a visceral feeling for what it is like to be a soldier in a combat zone, and what it is like to return home, still reeling from the dislocations of war. Gritty, unsparing and fiercely observed, these stories leave us with a harrowing sense of the war in Iraq as it was experienced, day by day, by individual soldiers * * New York Times * * Incendiary stories of war . . . Redeployment is the real thing - a vivid and vital battery of war stories that does not rely solely on its subject matter for impact (although, make no mistake, the subject certainly has impact) . . . A must-read * * Guardian * * One of the great story collections of recent times -- COLUM McCANN Achingly beautiful * * Financial Times * * After the first reading I immediately began the second . . . Truly haunting, and truly, indisputably, brilliant -- NIALL GRIFFITHS Brilliant * * Sunday Telegraph * * Klay's short stories pull off something incredibly subtle * * Sunday Times * * In Klay's hands, Iraq comes across not merely as a theater of war but as a laboratory for the human condition in extremis . . . Redeployment is hilarious, biting, whipsawing and sad. It's the best thing written so far on what the war did to people's souls * * New York Times Book Review * * A masterwork in mostly spare prose, its tonal range from laugh-out-loud, Joseph Heller-esque absurdity to soul-crushing bleakness. It may be our best literary window into the Iraq war * * Independent * *

Phil Klay is a veteran of the US Marine Corps. He served in Iraq during the surge and subsequently received an MFA from Hunter College. His work has featured in the New York Times, Tin House and Granta. He is co-host of the Manifesto! podcast and is the author of Redeployment and Missionaries, his debut novel. Redeployment was a New York Times bestseller and won the National Book Award for Fiction, the John Leonard Award and the Warwick Prize. @PhilKlay | philklay.com