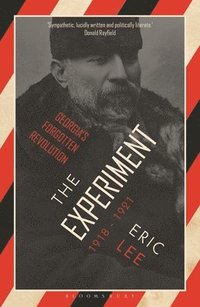 av Eric Lee
Häftad Engelska, 2017-09-15
169
Köp
Spara som favorit
Kan levereras innan julafton!
Finns även som
Visa alla 1 format & utgåvor
For many the Russian Revolution of 1917 was a symbol of hope. In the eyes of its critics, however, Soviet authoritarianism and the horrors of the gulags have led to the revolution becoming synonymous with oppression, threatening to forever taint the very idea of socialism. The experience of Georgia, which declared its independence from Russia in 1918, tells a different story. In this riveting history, Eric Lee explores the little-known saga of the country's experiment in democratic socialism, detailing the epic, turbulent events of this forgotten chapter in revolutionary history. Along the way, we are introduced to a remarkable cast of characters - among them the men and women who strove for a more inclusive vision of socialism that featured multi-party elections, freedom of speech and assembly, a free press and a civil society grounded in trade unions and cooperatives. Though the Georgian Democratic Republic lasted for just three years before it was brutally crushed on the orders of Stalin, it was able to offer, however briefly, a glimpse of a more humane alternative to the Soviet reality that was to come.
Visa hela texten

A well-researched, well-written and engaging account ... a welcome and necessary addition to the literature.' * European History Quarterly * This is an important book. It is the first study in English of the Menshevik government in Georgia between 1918 and 1921. * Chartist * Lee provides a fascinating account of what the country briefly looked like under Menshvik rule and how this compared to the regime established by Georgia's most famous son, Stalin. * Europe Now * As Lee reminds us, this Menshevik-dominated government backed free elections, freedom of the press, an independent judiciary, parliamentary rule and free trade unions. Perhaps its most impressive achievement was to carry out agrarian reform, allowing peasants to buy land at reasonable prices and not resorting to the catastrophic forced collectivization the Bolsheviks later employed. Visiting Georgia, a Western socialist like Karl Kautsky could declare it the "antithesis to Bolshevism." * New York Times * Lee's gripping, well-researched Operation Basalt shines a bright light on a tiny, yet important, corner of World War II ...exciting and illuminating * Praise for Eric Lee's previous book Operation Basalt, Tampa Bay Times * Riveting * Praise for Eric Lee's previous book Operation Basalt, Wall Street Journal * An authentic and compelling read * Praise for Eric Lee's previous book Operation Basalt, Damien Lewis, best-selling author of The Nazi Hunters and Churchill's Secret Warriors * A sympathetic, lucidly written and politically literate account of the first Georgian Republic, which makes exhaustive use of the accounts of foreign observers as well as some of the major leading figures. * Donald Rayfield, author of Stalin and His Hangmen * Covering a crucial but strangely overlooked period in the fevered evolution of socialism, we've been waiting for this book for a long time. Fortunately, it arrives excellently written and researched. * Peter Nasmyth, author of Georgia: In the Mountains of Poetry * In a clear and succinct style, Eric Lee paints a sympathetic portrait of this remarkable experiment in democratic socialism. Lee has brought this almost unknown story out of the shadows, giving it its proper place in the historiography of socialism and the Russian Revolution. * Stephen Jones, author of Socialism in Georgian Colors *

Eric Lee is a journalist and historian who has spent over thirty years researching independent Georgia, and has himself been active in trade union and political struggles in both the US and UK. His previous works include Saigon to Jerusalem: Conversations with Israel's Vietnam Veterans (1993) and Operation Basalt: The British Raid on Sark and Hitler's Commando Order (2016). www.ericlee.info/theexperiment

Timeline Preface Prologue 1. Founding Father 2. Dress Rehearsal 3. The Experiment Begins 4. The Turn towards Germany 5. At War With Armenia 6. The British Take Charge 7. Georgia's Agrarian Revolution 8. The Independence of the Trade Unions 9. The Rise and Rise of the Cooperatives 10. Achilles' Heel: Georgia's National Minorities 11. Fifth Column 12. Europe's Socialist Leaders Come for a Visit 13. The State That Never Was 14. The Experiment Ends 15. The Final Battle 16. Another Revolution Was Possible