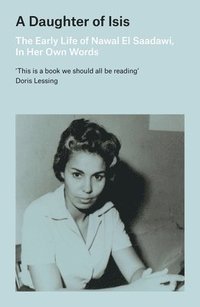 A Daughter of Isis

The Early Life of Nawal El Saadawi, In Her Own Words

av Nawal El Saadawi
Häftad Engelska, 2018-05-15
139
Köp
Spara som favorit
Skickas inom 5-8 vardagar.
Fri frakt inom Sverige över 159 kr för privatpersoner.
Finns även som
Visa alla 2 format & utgåvor
'Against the white sand, the contours of my father's body were well defined, emphasized its existence in a world where everything was liquid, where the blue of the sea melted into the blue of the sky with nothing between. This independent existence was to become the outer world, the world of my father, of land, country, religion, language, moral codes. It was to become the world around me. A world made of male bodies in which my female body lived.' Nawal El Saadawi is one of the greatest writers to come out of the Arab world. Born in a small Egyptian village in 1931, her life and writings have shown an extraordinary strength of character and a unique ability to create new worlds in the fight against oppression. Saadawi has been pilloried, censored, imprisoned and exiled for her refusal to accept the oppressions imposed on women by gender and class. Still, she continues to write. A Daughter of Isis is the first part of this extraordinary woman's autobiography. In it she paints a sensuously textured portrait of the childhood that produced the freedom fighter: from the trauma of female genital mutilation at seven years old to eluding the grasp of suitors at the age of ten. We see how, as a young adult qualifying, against the odds, as doctor, she moulded her own creative power into a weapon - and how her use of words became an act of rebellion against injustice.
Visa hela texten

'This is a book we should all be reading' Doris Lessing 'I think her life has been one long death threat. At a time when nobody else was talking, she spoke the unspeakable.' Margaret Atwood, BBC Imagine 'As I finished reading Dr. Nawal's autobiography I felt a sudden sense of loss. I didn't want to leave her. I went back and read the last sections again, and then again, until I remembered how many other books she has written. Then I felt delight that I will be able to return to her words and to her stories, and that so many others will share in them.' Bettina Aptheker 'In this book we see how, from an early age, Saadawi combines her love of the Arabic language with her awareness of gender-based oppression to create texts which are as subversive as they are moving.' Modern African Studies

Nawal El Saadawi is an internationally renowned writer, novelist and fighter for women's rights both within Egypt and abroad. She holds honorary doctorates from, among others, the universities of York, Illinois at Chicago, St Andrews and Tromso as well as Universidad Nacional Autonoma de Mexico. Her many prizes and awards include the Premi Internacional Catalunya in 2003, the Council of Europe North-South Prize in 2004, the Women of the Year Award (UK) in 2011, the Sean MacBride Peace Prize (Ireland) in 2012, and the French National Order of Merit in 2013. Her books have been translated into over forty languages worldwide. They are taught in universities across the world.

Preface - The Gift 1. Allah and McDonalds 2. The Cry in the Night 3. God Above, Husband Below 4. We Thank God for our Calamities 5. Flying with the Butterflies 6. Killing the Bridegroom 7. Daughter of the Sea 8. My Revolutionary Father 9. The Lost Servant-Girl 10. The Village of Forgotten Employees 11. God Hid Behind the Coat-Stand 12. The Ministry of Nauseation 13. Dreaming of Pianos 14. To the Circus 15. The Singing Man 16. The Whiskered Peasant 17. Uncles, Suitors and other Bloodsuckers 18. A Stove for my Mother 19. Coming to Cairo 20. The Long, Strong Bones of a Horse 21. Love and the Hideous Cat 22. Art Thieves 23. Mad Aunts and Abandoned Babies 24. The House of Desolation 25. The Secret Communist 26. Wasted Lives 27. Cholera, Ageing and Death 28. The Qur'an Betrayed 29. British English and Holy Arabic 30. The Name of Marx 31. The Brush of History Afterword - Living in Resistance