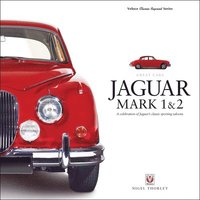 av Nigel Thorley
(1 röst)
Inbunden Engelska, 2017-05-01
359
Köp
Spara som favorit
Skickas inom 7-10 vardagar.
Fri frakt inom Sverige för privatpersoner.
The compact Jaguar saloons of the 1950s and 1960s were some of the most popular performance cars of their day, became a legend in their own time, and now are considered one of the most collectable of classics. In this fascinating, extensively illustrated book, Nigel Thorley describes the year by year history and development of the Jaguar Mark 1 and Mark 2 models, from the original design concept in the early 1950s, through to the final variants produced at the end of the 1960s. The author unearths many anecdotes and curiosities along the way, as well as covering the main body of evolution, to become the most popular and profitable models in the Jaguar range for many years. With a fabulous collection of period and specially commissioned photographs, this publication represents a feast of valuable information for anyone interested in general motoring history, Jaguar specific information, as well as for enthusiasts and owners of these fine cars.Out of print for some years, this popular book is now available again from Veloce as part of their Classic Reprint series.
Visa hela texten

Originally released in 2005, the first thing the reader will notice is that this book is 248mm x 248mm square and not following the A4 format works well; by increasing page area the text and images appear less cramped improving the readers experience. Just like Jaguar's saloon itself this book is beautifully produced, it is easy to absorb with a mix of superb in-period and studio images and adverts; one read I found very difficult to put down. - Grant Ford. Jaguar Mark 1 and 2 is the latest book released from Veloce Publishing's Classic Reprint Service, having been out of print for sometime it is a must have for Classic Jaguar Mark 1 & 2 fans or collectors. Nigel Thorley carefully walks through the history of this popular model year by year, detailing all the highs, the lows and the technical developments of the Jaguar Mark 1 and Mark 2 models. The book is extensively illustrated with a huge collection of period photos of the factory and racing photos throughout. The author unearths many fascinating facts and curiosities along the way, as well as covering the main evolution of the car, to become the most popular and profitable models in the Jaguar range for many years. - Autoaddicts.co.uk. This book is part of Veloce's Classic Reprint series. A good initiative because these old-timers are extremely well-known and the interest is so great. The book gives a good insight into Mark 1 (1955-1959) and Mark 2 (1959-1969). It contains many pictures from the time of then and also information about prices, technology, performance etc. Class! _ Autoliefhebbers. Originally published by Haynes in 2005, now reprinted by Veloce. If you don't have it, read on, because it is an excellent addition to any Jaguar library and presents a very good case for reprinting certain out-of-print titles. The Marks 1 and 2 epitomised Jaguar's 1950s/1960s values of stylish, good-performing cars at modest prices. Thorley's book starts with the cars design and development (there are wonderful photos of an early mock-up body propped up on blocks of wood) and runs right through to the final 240s and Daimler V8 250s in 1969. Along the way, many thousands of the various models were sold; they were raced and rallied with great success (a couple of New Zealand photos are included), their engines and breaking improved, and the road test were enormously enthusiastic for many years. This is a delightful book, with hundreds of photos, period adverts, some fascinating comparisons with competitors models, and it is full of fascinating details such as the non-smoking William Lyons initial intention not to fit any ashtrays to the first 2.4 saloons! Highly recommended. - Classic Driver. This model was the first Jaguar launched on TV through the BBC and would quickly win the hearts of drivers who loves speed and luxury. Asynchronous with 2.4 litre engine, but as soon as well as 3.4 litres. In this book is the history of origin, the prototypes, now the press thinks about it, technical data, and a description of the changes that this popular model has undergone. And that was not just on the road but also in the hand of drivers in races and rallies. Beautiful book with a lot of detailed information, press material, and beautiful studio pictures. Includes the Daimler 2.5 V8. - Klassiek & Techniek. It is a beautifully illustrated and produced 160 page hardback that would grace any library. With nearly 270 illustrations the publishers have allowed enough space to make this a suitably lavish tribute to a Great British Marque Classic. Thorley charts the car's design and development and records the Jaguar engineers' nervousness at building their first monocoque chassis/body. The narrative includes useful tables for colour combinations, road test comments, comparisons with rivals, press reaction at home and abroad and period advertising. - Big End/ All Torque. Jaguar Mark I & II: A Celebration of Jaguar's classic sporting saloons was out of print for some years, but happily

Nigel Thorley has been an enthusiast of the Jaguar marque all his life, his father and elder brother owning numerous examples of the brand. Nigel acquired his first Jaguar at the age of 18 and has only ever been without an example when he first got married (due to lack of funds)! At the time of writing he has owned over 70 Jaguars including no less than 16 Mark 2 models, so knows the cars intimately. He was a founder member and director of the largest Jaguar club, the Jaguar Enthusiasts' Club, and is still editing their monthly 140 page magazine. Nigel has also written over 20 titles on Jaguar topics, including You & Your Jaguar, Jaguar - All the Cars, Jaguar E-Type (also in the Great Cars series) and several Essential Buyer's Guides published by Veloce.