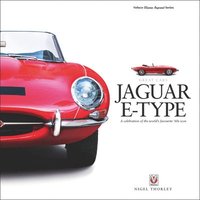 A Celebration of the World's Favourite '60s Icon

av Nigel Thorley
Inbunden Engelska, 2017-05-01
359
Köp
Spara som favorit
Skickas inom 7-10 vardagar.
Fri frakt inom Sverige för privatpersoner.
Four decades after its launch, the Jaguar E-type is still at the top of most car enthusiasts' Christmas lists. An enduring example of design and engineering excellence, it is instantly recognisable to people around the world. In production from 1961 to 1974, it was celebrated at the time as the most glamorous sports car of them all and is today one of the best-know icons of the 60s. If ever there was a deserving recipient of the tile 'Great Car,' it's the classically elegant Jaguar E-type.In this fascinating, extensively illustrated book, Nigel Thorley describes the year by year history and development of the Jaguar E-Type, including anecdotes and curiosities along the way. Together with a sumptuous collection of colour photographs, this adds up to a feast of nostalgia that will delight all admirers of this most sinuous of cats.
Visa hela texten

Published by Veloce this is the latest edition their Greatest Cars series, and there is no denying that that Jaguar E-Type is definitely one of the world's greatest cars, and a true icon of the 60s. Launches at the Geneva Motor Show in 1961, production continued of the Jaguar E-Type until 1974. In total 72,500 cars were produced in three series, using two engines and three body styles. The book walks you through the year-by-year history and development of the E-Type including anecdotes along the way. 24 pages have been added in this edition to celebrate the E-Types 50th anniversary and for racing fans there are pages and pages of history and photos. - autoaddicts.co.uk. The book described in words and pictures the history and development of the Jaguar E-Type year by year. It is definitely recommended. - Jaguar Gazette. With the price of E-Types continuously soaring at an extraordinary rate, you might be either fascinated by what makes the model so special and desirable - or maybe you want to investigate the models in depth with a view to investing in one. If so, in either case this book will be invaluable to you. Authored by one of the worlds Jaguar authorities, Nigel Thorley, it covers every variation in the model line-up, and is beautifully designed in a clean and simple fashion which makes it very easy to understand. Thorley delves into the evolution from the D-Type racer, a car whose construction and design revolutionised the racing world, and then follows the path taken to smoothly progress in into the civilised and sensational looking E-Type - which undercut its rival by a huge chunk. The images used are both historic and especially taken for the publication, and don't fail to be beautifully reproduced. In very clear fashion every variation through the unofficial Series 1 1/2, through to the Series 2 and finally the V12 engined Series 3 is illustrated and explained. That is not an easy thing to do either because Jaguar was renowned for blending changes as it ran out of parts rather than on a time basis. It is not a technical book, that would be a mistake in light of its purpose, but still technical changes are all there from the introduction of the all-synchromesh gearbox to the 2+2 body. Here is a handsome tome which is a must for any Jaguar fans library. - Jaguar Magazine. Thorley guides us through all coupe and roadster iterations of the three E-type series produced between 1961 and 1974 (and their 3.8-, 4.2 and 5.3-litre engines), along with the heartbreaking mods imposed by US health and safety regs that gradually muddied the car's purity of line and choked its top-end power. This [is a] lavishly illustrated and superior coffee-table book. To tempt those clutching an earlier edition this latest update tacks on a raft of extras, both tribal and fan friendly. Thorley strikes an appealing balance for anoraks and poseurs alike. - Classic Motoring Review. With over 180 pages and more than 250 illustrations, the book provides a solid and useful history of the E, bringing the chronological year-by-year development as well as technical data, motorsport - all blended with trivia from the history of the car. - Austro Classic. Here's another of Veloce's splendid Classic Reprint Series rejuvenating an out-of-print Haynes publication that will find a ready audience today. Sub-titled 'A celebration of the world's favourite '60s icon' this is, for once, no journalistic hyperbole. Veloce has pulled out all the stops to make the production worthy of the title. This is in hardback format, runs to 184 pages and contains 264 photos and illustrations which lavishly support an informative text. Author and enthusiast Thorley gives an honest appraisal of the E-Type's development, the original design's good points as well as its bad, the improvements and all the important changes along the way. There has never been a car quite like the Jaguar E-Type, and there may never be again. Even if you cannot afford one just now you can indulge your

Nigel Thorley has been an enthusiast of the Jaguar marque all his life, his father and elder brother owning numerous examples of the brand. Nigel acquired his first Jaguar at the age of 18 and has only ever been without an example when he first got married (due to lack of funds)! At the time of writing he has owned over 70 Jaguars, so knows the cars intimately. He was a founder member and director of the largest Jaguar club, the Jaguar Enthusiasts' Club, and is still editing their monthly 140 page magazine. Nigel has also written over 20 titles on Jaguar topics, including You & Your Jaguar, Jaguar - All the Cars, Jaguar Mark 1 & 2 (also in the Great Cars series), and several Essential Buyer's Guides published by Veloce.