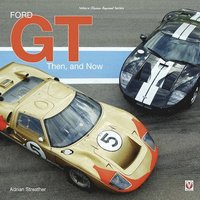 av Adrian Streather
Häftad Engelska, 2017-06-01
419
Köp
Spara som favorit
Skickas inom 10-15 vardagar.
Fri frakt inom Sverige för privatpersoner.
This book provides a different view of the Ford GT legend, featuring driver interviews, and both historical and new photographic records. Some of the old myths and legends of the racetrack have been revisited, Ford GT drivers have been given their place on the roll of honour, and their opponents on the racing track are also discussed. With details of the Ford GT replica industry, this book is an historical and interesting record of this classic car, and a must for all GT enthusiasts.
Visa hela texten

The Ford GT40's origins need no introduction, but this Adrian Streather offering brings together early and rare Ford archive shots and race photos to build a timeline (and many of the photos are excellent). The featurettes on replicas gold more weight than ever with so many now gracing historic meetings. - Motor Sport. Covering the Ford GT, it isn't just a review of the Ford GT from the late 1960s and early 1970s. It does that, but also introduces the new Ford GT crated in the mid 2000s. The book doesn't just cover the factory Ford GTs created, but also goes on to document the numerous other companies which built replicas, or cars based on the original, which is something not often seen elsewhere. There are also plenty of period photographs of the cars being raced, coupled with pictures detailing features such as cockpit layouts and carburettor setups. - www.silhouet.com. A detailed and informative guide to the original GT40, and the 2004 GT, that's packed with great photos.- Auto Express. Veloce's comprehensive history of the Ford GT, both original and new, was first published in 2006 and was quickly out of print. Reprinted in 2017, it's one of the most complete histories of these fabulous cars. A weighty 240-page tome, it contains nearly 500 photos of both the Sixites and Noughties cars, many never before seen. If you are intrigued by the who, what, whys and wherefores of creating a race-winning supercar, this is an essential read. - Classic American. This book is an excellent history of the Ford GT, packed full of beautiful photographs, many full page, including detailed photos of the vehicle components. The history describes many of the GTs by chassis numbers and includes their racing history and driver impressions. This book is a great resource for fans of the Ford GTs, readers interested in racing history, and provides valuable details for modellers of Ford GT model kits. - IPMS/USA Journal.

Adrian Streather was born on Christmas Day 1958 in Basingstoke, England, but is an Australian citizen. Adrian, a less than successful racing driver of Ford Escorts many years ago, has friends who actually drove the original Ford GT in competition. Listening to their stories created the desire to write about the Ford GT. However, it was driving the new Ford GT on a European road trip which really inspired him. Adrian is a prolific automotive author.