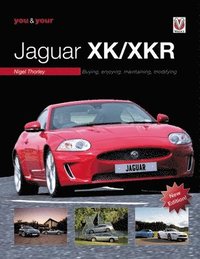 av Nigel Thorley
(1 röst)
Inbunden Engelska, 2018-11-02
329
Köp
Spara som favorit
Skickas inom 7-10 vardagar.
Fri frakt inom Sverige för privatpersoner.
New updated and enlarged edition! Jaguar's XK sports models were produced from 1996 to 2014 in two distinct forms: the original, steel-bodied cars and the later advanced technology aluminium-bodied versions. Highly significant for Jaguar, these cars reintroduced the world to Jaguar sports car motoring and, in doing so, echoed the success of previous icons, such as the E-type. With no plans from Jaguar for a direct replacement, the XK and XKR are guaranteed to become much sought after models, which are already attracting keen interest from driving enthusiasts. This book is the only current title covering the whole model range in precise detail, and is a vital read - both to those who currently own an XK, and anyone contemplating purchasing one. This is a book that will interest all Jaguar enthusiasts and those interested in the history of Jaguar and its cars - the perfect XK `handbook.'
Visa hela texten

From model gestation to electrical gremlins, it's all here with every single tiny update and special edition. Octane.It's nicely printed with good colour photos. Auto Express

Bloggat om You &; Your Jaguar XK/XKR

Nigel Thorley has been involved with Jaguars all his life, having owned 68 at the time of writing. His first Jaguar came at the age of 18, and he has owned most models over the years, currently owning a 5.0 litre XK Portfolio convertible and an XJ saloon. Nigel has written over twenty titles on the Jaguar marque, including several of the Essential Buyer's Guides for Veloce Publishing. He is a founder member and director of the Jaguar Enthusiasts' Club and has edited its magazine Jaguar Enthusiast since 1984. Having previously edited Jaguar Driver magazine, he has also written for many other forms of media.

X-100 to XK8 in under five years. The new car in detail. The cat is back. R-rated. On-going development and excitement. The millenium and beyond. The new generation XK. The birth of a New XK. The New XK in detail. Late model developments. A new boss and ideas. The end of the line. Buying an XK. Owning, running and caring for your XK. Modifications and miscellanea. People and their cars. Various appendix.