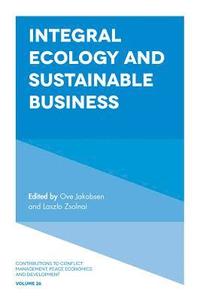 av Ove D Jakobsen, Laszlo Zsolnai
Inbunden Engelska, 2017-09-20
1059
Köp
Spara som favorit
Skickas inom 5-8 vardagar.
Gratis frakt inom Sverige över 159 kr för privatpersoner.
Finns även som
Visa alla 2 format & utgåvor
This collection addresses the relationship between business, the natural environment, ethics, and spirituality. While traditional economic theory generally assumed firms maximize profits, it has long been acknowledged that other factors may be important to understanding firm activities. The role of ethics and spirituality in society is clearly significant, yet economists have traditionally had little to say on these topics and how they intersect with economic activity. Integral Ecology integrates concerns for people and the planet. It sees the world as systemically linked to ecology, economy, equity and justice and accessible through the natural and social sciences, arts and humanities. It links to sustainable business through frugal consumption, acknowledging the intrinsic value of nature, and adopting holistic management practices. This insightful study provides the insights of economists, business scholars, philosophers, lawyers, theologians and practitioners who are working in Europe, North America, and Asia. Their contributions highlight the relationship between integral ecology and sustainable business practices, and explore the meaning of sustainability in relation to both human and non-human life, offering a series of new and invigorating approaches to sustainable business practices and sustainability leadership.
Visa hela texten

Scholars of economics, business, philosophy, and law explore the meaning of sustainability in relation to human and non-human life, offering a series of new approaches to sustainable business practices and sustainable leadership. The 15 papers were selected from presentations to the May 2016 conference Integral Ecology, Earth Spirituality and Economics, in Bodo Norway. They cover sustainability and the meaning of life, toward integral ecology, and practicing sustainability. -- Annotation (c)2017 * (protoview.com) *

Ove Jakobsen is Professor in Ecological Economics at the Business School/Nord University, Norway. He is co-founder and leader of Centre for Ecological Economics and Ethics. Jakobsen holds master degrees in Marketing (1982), Business Administration (1987) and Philosophy (1991). He received his Dr. Oecon. degree from NHH (Norwegian School of Economics) in 1989. He has published a great number of books and articles both nationally and internationally. In 2000, Jakobsen was awarded the SAS and the Norwegian Economics Association prize for the best integration of environmental and social responsibility in higher economic education in Norway. He is frequently invited as a speaker at numerous conferences, seminars, workshops and public meetings. Laszlo Zsolnai is Professor and Director of the Business Ethics Center of Corvinus University of Budapest, Hungary. He is President of the European SPES Institute in Leuven, Belgium. He also serves as Co-Chair of the Future Earth Finance and Economics Knowledge-Action Network in Montreal, Canada. His latest books include Beyond Self: Ethical and Spiritual Dimensions of Economics (2014. Peter Lang Academic Publishers, Oxford), The Spiritual Dimension of Business Ethics and Sustainability Management (2015, Springer), Post-Materialistic Business: Spiritual Value-Orientation in Renewing Management (2015, Palgrave) and Ethical Leadership. Indian and European Spiritual Approaches (2016, Palgrave). His website: http://laszlo-zsolnai.net