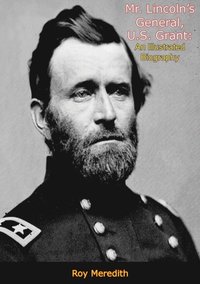 av Roy Meredith
E-bok (EPUB - DRM), Engelska, 2017-01-12
45
Ladda ned
Spara som favorit
Laddas ned direkt
Läs i vår app för iPhone, iPad och Android
Unmissable biography of General Ulysses S. Grant, edited and arranged by Roy Meredith, drawing mostly on material from General Grant's personal memoirs, and richly illustrated throughout with more than 300 illustrations.&quoteGENERAL ULYSSES SIMPSON GRANT, like Sherman, Sheridan, McPherson, Porter, Farragut, and a few others, was one of that small but excellent school of military and naval officers who made up the hard core of the Army and Navy during the Civil War. Their firm, practical grasp of their calling set them distinctly apart from the wire-pullers, glory-seekers, incompetents, and self-seeking political generals, who, having little or no military talent, resorted to cupidity, bluff, and undercover politics to further their personal ambitions.&quoteCharles Anderson Dana, Assistant Secretary of War in Mr. Lincoln's Cabinet, took particular notice of this when he visited General Grant's headquarters sometime after the Battle of Shiloh. He mentioned the names of three remarkable men, whose lack of guile and of jealousy and whose devotion to duty above personal ambition made a great impression on his mind. Grant, Sherman, and McPherson, &quotein their unpretending simplicity,&quote he wrote, &quotewere alike as three peas&quote&quoteIn contrast to today's popular conception of General Grant as soldier and President is the simple fact that General Grant was indeed one of America's greatest soldiers; a punctilious gentleman of scrupulous honesty and quiet and profound ability.&quote
Visa hela texten