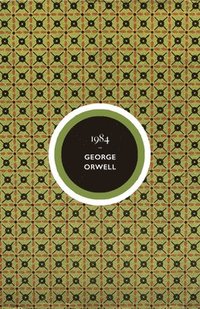 av George Orwell
Inbunden Engelska, 2020-08-13
129
Köp
Spara som favorit
Skickas inom 5-8 vardagar.
Fri frakt inom Sverige över 159 kr för privatpersoner.
Finns även som
Visa alla 8 format & utgåvor
It was a bright cold day in April, and the clocks were striking thirteen. The year is 1984, and life in Oceania is ruled by the Party. Under the gaze of Big Brother, Winston Smith yearns for intimacy and love - "thought crimes" that, if uncovered, would mean imprisonment, or death. But Winston is not alone in his defiance, and an illicit affair will draw him into the mysterious Brotherhood and the realities of resistance. Nineteen Eighty-Four has been described as chilling, absorbing, satirical, momentous, prophetic and terrifying. It is all these things, and more. The Authoritative Text. With an introduction by Robert Harris. *The jacket of this stunning hardback edition features period artwork by Elizabeth Friedlander, one of Europe's pre-eminent 20th-century graphic designers. Look out for complementary editions of Orwell's essential works Animal Farm and Down and Out in Paris and London.*
Visa hela texten

Many writers and journalists have tried to imitate his particular kind of clarity without possessing anything like his moral authority -- Peter Ackroyd * The Times * Matchlessly sharp and fresh... The clearest and most compelling English prose style this century -- John Carey * Sunday Times * Orwell remains the most indispensable English writer of his period * Observer * His final masterpiece... Enthralling and indispensable for understanding modern history * New York Review of Books * The book of the twentieth century...haunts us with an ever-darker relevance * Independent *

George Orwell (Author) George Orwell (1903-1950) is one of England's most famous writers and social commentators. He is the author of the classic political satire Animal Farm and the dystopian masterpiece Nineteen Eighty-Four. He is also well known for his essays and journalism, particularly his works covering his travels and his time fighting in the Spanish Civil War. His writing is celebrated for its piercing clarity, purpose and wit and his books continue to be bestsellers all over the world. Robert Harris (Introducer) Robert Harris is the author of fourteen bestselling novels: the Cicero Trilogy - Imperium, Lustrum and Dictator - Fatherland, Enigma, Archangel, Pompeii, The Ghost, The Fear Index, An Officer and a Spy, which won four prizes including the Walter Scott Prize for Historical Fiction, Conclave, Munich, The Second Sleep and V2. Several of his books have been filmed, including The Ghost, which was directed by Roman Polanski. His work has been translated into forty languages and he is a Fellow of the Royal Society of Literature. He lives in West Berkshire with his wife, Gill Hornby.