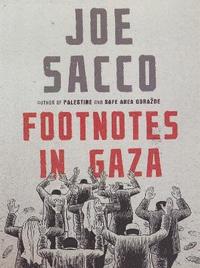 av Joe Sacco
Häftad Engelska, 2019-08-01
209
Köp
Spara som favorit
Skickas inom 5-8 vardagar.
Fri frakt inom Sverige för privatpersoner.
Finns även som
Visa alla 1 format & utgåvor
Rafah, a town at the southernmost tip of the Gaza Strip, is a squalid place. Raw concrete buildings front rubbish-strewn alleys. The narrow streets are crowded with young children and unemployed men. Situated on the border with Egypt, swaths of Rafah have been reduced to rubble. Rafah is today and has always been a notorious flashpoint in this most bitter of conflicts. Buried deep in the archives is one bloody incident, in 1956, that left 111 Palestinian refugees dead, shot by Israeli soldiers. Seemingly a footnote to a long history of killing, that day in Rafah - coldblooded massacre or dreadful mistake - reveals the competing truths that have come to define an intractable war. In a quest to get to the heart of what happened, Joe Sacco arrives in Gaza and, immersing himself in daily life, uncovers Rafah, past and present. Spanning fifty years, moving fluidly between one war and the next, alive with the voices of fugitives and schoolchildren, widows and sheikhs, Footnotes in Gaza captures the essence of a tragedy. As in Palestine and Safe Area Gorazde, Joe Sacco's unique visual journalism has rendered a contested landscape in brilliant, meticulous detail. Footnotes in Gaza, his most ambitious work to date, transforms a critical conflict of our age into intimate and immediate experience.
Visa hela texten

Joe Sacco's brilliant, excruciating books of war reportage are potent territory... He shows how much that is crucial to our lives a book can hold -- Margo Jefferson * The New York Times Book Review * There is virtually no precedent for what he does... Sacco is legitimately unique * The New York Review of Books * Sacco is Art Spiegelman's most talented artistic descendant... [He] is tipped to win the comics world a second Pulitzer * The Economist * Sacco has produced a series of extraordinary comic books that convey, with unusual attentiveness to the details of everyday life, the impact that war has on civilians * Boston Globe *

Joe Sacco, one of the world's greatest cartoonists, is widely hailed as the creator of war reportage comics. He is the author of, among other books, Palestine, which received the American Book Award, and Safe Area: Gorazde, which won the Eisner Award and was named a New York Times notable book and Time magazine's best comic book of 2000. Hisbooks have been translated into fourteen languages and his comics reporting has appeared in Details, The New York Times Magazine, Time, Harper's and the Guardian. He lives in Portland, Oregon.