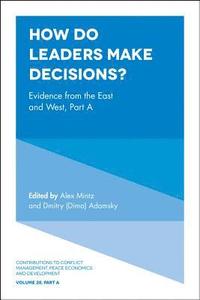 How Do Leaders Make Decisions?

Evidence from the East and West, Part A

av Alex Mintz, Dmitry Adamsky
Inbunden Engelska, 2019-09-23
889
Köp
Spara som favorit
Skickas inom 5-8 vardagar.
Fri frakt inom Sverige för privatpersoner.
Finns även som
Visa alla 2 format & utgåvor
Understanding how leaders make foreign policy and national security decisions is of paramount importance for the policy community and academia. This book explores how leaders such as Trump, Obama, Netanyahu and others make decisions using the Applied Decision Analysis (ADA) method. The chapters gathered here analyse the decisions made by key political figures around the world, past and present, in order to shed light on how these decisions are made and what policy implications they have for their own and other nations. Several chapters also focus on military decision making, including around pivotal times in history including the second world war and the evolution of nuclear warfare.
Visa hela texten

Alex Mintz (PhD, Northwestern University) is Provost of IDC Herzliya. He served as Dean of the Lauder School of Government, Diplomacy and Strategy at IDC from 2008-2014 and as Director of the Institute for Policy and Strategy (IPS) from 2014-2017. Professor Mintz held visiting professor appointments at Yale University and Columbia University, and other schools, as well as a chaired professorship at Texas A&M University. Dmitry (Dima) Adamsky is an Associate Professor at the Lauder School of Government, Diplomacy and Strategy at the IDC Herzliya, and is a Head of the BA Honors Track in Strategy and Decision Making. Prior to joining the school in 2010, he was a pre- and post-doctoral fellow at Harvard University, a visiting fellow at the Institute of War and Peace Studies, Columbia University, and at the Norwegian Institute for Defense Studies.