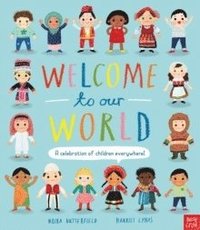 Welcome to Our World: A Celebration of Children Everywhere!

av Moira Butterfield
Inbunden Engelska, 2018-06-07
159
Köp
Spara som favorit
Skickas inom 5-8 vardagar.
Gratis frakt inom Sverige över 159 kr för privatpersoner.
Finns även som
Visa alla 1 format & utgåvor
Find out how children live all around the world in this beautifully illustrated book Children all over the world are very different, but they also have much in common. In this beautifully illustrated book, young children can learn all about what people in other countries eat, wear and play, and how they speak and celebrate. From breakfasts to birthdays, cakes to clothes, and hiccups to hellos, there are so many ways to say and do things - but everyone shares a love of family, friends, food and fun. This delightful book teaches us that despite different languages, customs and traditions, it really is a small world, after all. A unique, warm-hearted book to help teach children understanding, harmony and respect.
Visa hela texten

Moira Butterfield (Author) Moira Butterfield lived and travelled in lots of different locations as a child, and still thinks our world is an endlessly exciting place to explore. She went on to study literature and become an author of children's non-fiction and fiction. She believes there are no limits to the imagination or to the wonder of our planet and so she has written about many different subjects, from ancient treasures to future worlds via pirates, kings, jungles and sea monsters. Moira lives in Bath, Somerset, with her family. She loves to cycle, sew and sing. Harriet Lynas (Illustrator) Harriet Lynas is an award-winning children's book illustrator who lives in Hertfordshire with her husband and their son. She has always loved doodling since she was able to hold a pencil and decided to become an illustrator at the age of ten. After studying Visual Communication Design at University, Harriet worked as a graphic designer in the fashion industry before becoming a children's book illustrator. When she is not drawing, she enjoys cooking exotic foods and country walking.