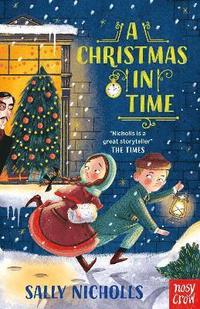 A Christmas in Time

av Sally Nicholls
Häftad Engelska, 2020-10-01
109
Köp
Spara som favorit
Finns även som
Visa alla 1 format & utgåvor
Alex and Ruby are back in their SECOND time-slip adventure, tumbling back into a Victorian Christmas! From multi-award-winning author Sally Nicholls comes another brilliant action-packed adventure for 7+ readers, beautifully illustrated by Rachael Dean. When Alex and Ruby fall through the mirror in their aunt's house, they find themselves in a different historical period, each time with a different task to perform before they can return to the present. From Edwardian crime capers to Victorian Christmasses, their time-slip stories are always exciting and beautifully told. A Victorian Christmas is lovely - all the food and candles and games and singing - unless you're poor, motherless Edith who is condemned to be sent to a cruel boarding school on Boxing Day. Can Alex and Ruby persuade her strict father that home is where the heart is instead? Full of action and humour and featuring exciting black-and-white illustrations throughout, this is another superb time-slip story which brilliantly brings history to life as part of an adventure. 'A clever vehicle for introducing the differences between then and now in an accessible way, with a fast-paced plot and a lovely spooky ending' - The Times on A Chase in Time Have you read Alex and Ruby's other adventures: A Chase in Time, An Escape in Time and A Secret in Time? Cover illustration by Isabelle Follath.
Visa hela texten

Sally Nicholls (Author) Sally Nicholls was born in Stockton-on-Tees, just after midnight, in a thunderstorm. She spent most of her childhood trying to make real life as much like a book as possible. Her first book, Ways to Live Forever, won the Waterstones Children's Book Prize in 2008 and in 2015 her book An Island of Our Own was shortlisted for the Costa children's prize. Sally lives in Liverpool with her husband and two sons, writing stories and trying to believe her luck. Rachael Dean (Illustrator) Rachael Dean is a UK based freelance illustrator, who lives on the coast near Liverpool. She studied Graphic Design and Illustration at Liverpool John Moore's University, and graduated in 2017 with a First Class Honours degree. Rachael works traditionally painting images which are vivid and bold. She has a penchant for pattern but her real passion lies in the outdoors and travelling. She loves to gather inspiration from beautiful scenes of nature, which is often reflected in her work. Rachael's clients include Andersen Press, Chicken House, Nosy Crow, Egmont, Puffin and Penguin Random House US.