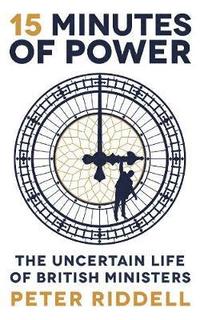 The Uncertain Life of British Ministers

av Peter Riddell
Inbunden Engelska, 2019-07-04
209
Köp
Spara som favorit
Skickas inom 3-6 vardagar.
Fri frakt inom Sverige för privatpersoner.
Finns även som
Visa alla 1 format & utgåvor
Aside for the secretaries of state, those lofty roles at the Home Office, MOD, Exchequer, and Foreign office, the ministers of the UK are a cast of roles that expand, and contract based on the whims and political needs of the Prime Minister. Within their portfolios those MPs and Lords are immensely powerful - able to reshape whole sectors of British society, grant or refuse government contracts and planning permission, and intervene in matters throughout the country. And yet, few members of the British Public could name every single minister and fewer still could say the extent of each minister's responsibilities. We like to imagine that they are competent, prepared, and entirely in control, and we hold them to standards as though they are. But they are often none of those things. These men and women serve at the pleasure of the Prime Minister. Any misstep or scandal can invite media attention, public outcry, and their swift departure. At the same time, their resignations can shatter political alliances and bring down Prime Ministers and even governments. Their positions are, therefore, both immensely powerful and precarious. In Fifteen Minutes of Power, Peter Riddell draws on interviews with former ministers, conducted on behalf of the Institute of Government, to reveal the fraught existence of these powerful men and women.
Visa hela texten

A fluent, entertaining and at the same time serious analysis of the British way of governing -- Chris Mullin * Spectator * Should political wannabes be seeking some holiday literature, here is a tome which they really should read (preferably through their fingers) ... fascinating -- Ruth Wishart * Herald * Praise for In Defense of Politicians (In Spite of Themselves): In their hour of acute need, the British political class has found a true and candid friend in Peter Riddell part historian; part anthropologist; and part psychotherapist. They should cherish him and his book as a guide on how best they might rise to the level of events and increase the chances of an improvement in public trust in politicians and the political protest. -- Lord Peter Hennessey, Attlee Professor of Contemporary British History at Queen Mary University of London.

Peter Riddell is the former director of the Institute of Government and current Public Appointments Commissioner for the British Government. He is a journalist and was a regular contributor to the Financial Times, where he was US Editor and Washington Bureau Chief until 1991, and the Times. Over his career, he has gained access to the innermost reaches of Whitehall and has written seven books and dozens of articles revealing the inner-workings of British Politics. This work earned him a President's Medal from the British Academy and, in 2012, a CBE.