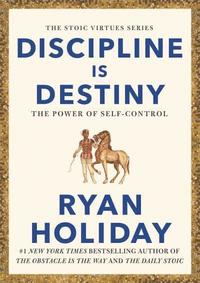 Köp
Spara som favorit
Kan levereras innan julafton!
Finns även som
Visa alla 1 format & utgåvor
A NEW YORK TIMES BESTSELLER 'Ryan Holiday is a genius' Chris Evans '[He] translates Stoicism ... into pithy catchphrases and digestible anecdotes for ambitious, twenty-first-century life hackers' New York Times The inscription on the Oracle of Delphi says: 'Nothing in excess.' C.S. Lewis described temperance as going to the 'right length but no further.' Easy to say, hard to practice - and if it was tough in 300 BC, or in the 1940s, it feels all but impossible today. Yet it's the most empowering and important virtue any of us can learn. Without self-discipline, all our plans fall apart. Here, Ryan Holiday shows how to cultivate willpower, moderation and self-control in our lives. From Aristotle and Marcus Aurelius, to Toni Morrison and Queen Elizabeth II, he illuminates the great exemplars of its practice and what we can learn from them. Moderation is not about abstinence: it is about self-respect, focus and balance. Without it, even the most positive traits become vices. But with it, happiness and success are assured: the key is not more but finding the right amount.
Visa hela texten

A powerful case for the virtues and values that leaders must live by in the modern world. -- Admiral James Stavridis, former NATO 16th Supreme Allied Commander A brisk and absorbing read. -- Annie Duke, bestselling author * Thinking In Bets * Ryan Holiday has helped bring the ancient teaching of Stoicism to millions of readers - from athletes and politicians to CEOs. * Good Morning America * Ryan Holiday is a genius. ... All of his books are amazing - you have got to get into Ryan Holiday, it's as simple as that. If you don't, you're doing yourself a disfavour. -- Chris Evans Ryan Holiday is among the most psychologically wise writers I know. -- Angela Duckworth, bestselling author of Grit Ryan Holiday is one of his generation's finest thinkers -- Steven Pressfield, author of The War of Art [Ryan Holiday is a] self-help sage, who is now a sought-after guru to NFL coaches, Olympians, hip-hop stars, and Silicon Valley entrepreneurs . . . [he] translates Stoicism, which had counted emperors and states men among its adherents during antiquity, into pithy catchphrases and digestible anecdotes for ambitious, twenty-first-century life hackers. * New York Times * I don't have many rules in life, but one I never break is: If Ryan Holiday writes a book, I read it as soon as I can get my hands on it. -- Brian Koppelman, screenwriter and director, Ocean's Thirteen and Billions

Ryan Holiday is one of the world's bestselling living philosophers. His books include The Obstacle Is the Way, The Daily Stoic, and Stillness Is the Key. Together, they've been translated into over 40 languages, sold over 4 million copies worldwide and spent over 300 weeks on the bestseller lists. He lives outside Austin with his wife and two boys ... and a small herd of cows and donkeys and goats. His bookstore, The Painted Porch, sits on historic Main St in Bastrop, Texas.