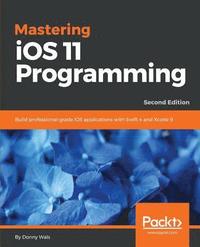 av Donny Wals
Häftad Engelska, 2017-10-27
569
Köp
Spara som favorit
Skickas inom 10-15 vardagar.
Fri frakt inom Sverige för privatpersoner.
Transition to a Professional iOS developer with the most in-depth and advanced level guide on Swift 4 and Xcode 9 About This Book * Filled with practical examples, this comprehensive guide explores all aspects of iOS Development. * Learn powerful techniques and industry`s best practices to become pro iOS Developer. * Unlock the full potential of iOS 11 programming with Swift 4 to build rich and powerful applications * Gain detailed insights into core iOS Programming concepts such as Extensions, Performance, Animations, CoreData and lot more with examples * Extend your iOS apps to new level with ARKit and CoreML Who This Book Is For This book is for developers who have some experience with iOS programming, but want to take their skills to next level by unlocking the full potential of latest version of iOS with Swift to build great applications. What You Will Learn * Build a professional iOS application from scratch * Create adaptive, complex views with Auto-Layout * Writing flexible and reusable code with Protocol Oriented programming * Ensure code quality by using proper tests. * Measure and improve performance with the Instruments app * Integrate with iOS on a deep level with several App Extensions * Implement AI, Machine Learning, Augmented Reality and more iOS 11 sweetness In Detail With good pay for iOS developers, a mature development environment, and Apple users spending more money on the App store than Android users, becoming a professional iOS developer is a great move. The journey to master iOS development and the new features of iOS 11 is not straightforward, but this book will help you make that transition. Written for Swift 4 and following the latest Swift API design guidelines, you won't just learn how to program for iOS 11, you'll learn how to write great, readable, and maintainable Swift code that's in line with the industry's best-practices. The progression of this book reflects the real-world development flow. In the book, you will build real-world applications. You will find a mix of thorough background information and practical examples, so you'll know how to make use of a technique right away while you also get a great understanding of the how and why. By the end, you will be able to build iOS applications that harness advanced techniques and make the best use of the latest and greatest features available in iOS 11. Style and approach This book takes a no-frill approach and is very code-specific. The focus is on teaching advanced concepts through a series of small projects and standalone examples that help you gain expertise with various aspects of iOS application development.
Visa hela texten

Donny Wals is a passionate, curious, developer from The Netherlands. Ever since he started his communications and multimedia design studies in Amsterdam, he knew that he didn't just want to build great websites and apps, but also transfer knowledge to his peers and newcomers. He got involved with coaching, mentoring, and assisting in his freshman year. During his final two years at college, he's been a teacher in web development and spent most of his free time exploring iOS and Objective-C. When Swift was first announced, it didn't take long for him to start playing around with it, and after just a few months of learning and experimenting Donny became the lead iOS developer for the start-up where he'd been working at the time. As an active member of the iOS-developers Slack community, Donny is always up for helping out people with their code and sharing his own knowledge with his peers.