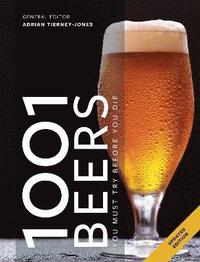 You Must Try Before You Die

av Adrian Tierney-Jones
Häftad Engelska, 2018-10-04
252
Bevaka
Spara som favorit
Tillfälligt slut – klicka "Bevaka" för att få ett mejl så fort boken går att köpa igen.
Finns även som
Visa alla 1 format & utgåvor
Fully revised and updated, 1001 Beers You Must Try Before You Die is a comprehensive and indispensable guide to the very best beers in the world, featuring world classics such as the finest traditional Czech pilsners, the best of Bavaria's refreshing wheat beers, England's Marble Chocolate beer, France's Vivat Blonde boutique beer and the cream of the new wave, cutting-edge, hophappy beers from the West Coast of America. From the 1980s real ale revival in Britain to the explosion of microbreweries in the United States, there has never been a better time to discover, and enjoy, the astounding variety of beers available. Many beers are undoubtedly more complex than some wines, both in their taste and in the method of their manufacture. A tribute to the burgeoning number of specialist and craft beers from around the world, this stunning book from the acclaimed 1001 series is illustrated with more than 800 photographs of beer bottles, glasses, labels, posters and breweries. Written in an informative and entertaining style by an international panel of experts, 1001 Beers You Must Try Before You Die also features critical tasting notes that will help you to match the right beer to the right food. Each description includes notes on the flavour and body of the beer, explains why it tastes the way it does and describes its strength and ideal serving temperature.
Visa hela texten

Adrian Tierney-Jones is a freelance journalist whose work appears in BrewersGuardian, The Daily Telegraph, Class, The Morning Advertiser, The Field and Beers of the Worldamongst others.He has written several books on the subject:West Country Ales, Pubsfor Families and The Big Book of Beer, and is the editor of the Society of IndependentBrewers South West's Brewers Herald. Tierney-Jones is an expert taster and talkeron the world of beer, and also writes about cider.He was the silver award winner inthe British Guild of Beer Writer's Award for National Journalism in 2006 andawarded the Guild's Budweiser Budvar John White Travel Bursary in 2007.