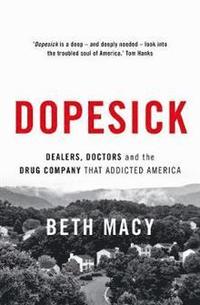 Dealers, Doctors and the Drug Company that Addicted America

av Beth Macy
Häftad Engelska, 2019-03-04
129
Köp
Spara som favorit
Skickas inom 5-8 vardagar.
Fri frakt inom Sverige över 159 kr för privatpersoner.
Finns även som
Visa alla 6 format & utgåvor
A TIMES BOOK OF THE YEAR. 'A shocking investigation ... [Dopesick] is essential' The Times. 'Shifting effortlessly between the socio-political and the personal, Macy weaves a complex tale that unfolds with all the pace of a thriller' Observer. 'Dopesick is a deep - and deeply needed - look into the troubled soul of America' Tom Hanks. 'Dopesick goes to the heart of one of the most urgent problems of our time' The Tablet. Beth Macy reveals the disturbing truth behind America's opioid crisis and explains how a nation has become enslaved to prescription drugs. This powerful and moving story explains how a large corporation, Purdue, encouraged small town doctors to prescribe OxyContin to a country already awash in painkillers. The drug's dangerously addictive nature was hidden, whilst many used it as an escape, to numb the pain of of joblessness and the need to pay the bills. Macy tries to answer a grieving mother's question - why her only son died - and comes away with a harrowing tale of greed and need.
Visa hela texten

'An unflinching look at the opioid crisis in the US ... Truly shocking in some places, Dopesick is a wake-up call for doctors and the pharmaceutical industry' British Journal of General Practice. 'I've read a few books about the opioid crisis in America and this might be the best ... [Macy] does a brilliant job. [She] follows the epidemic - from the pharmaceutical industry to the doctors, the drug dealers, the victims. She gets it all' Evening Standard. 'Beth Macy's book, told in the manner of a pace thriller, is a shocking investigation into where and how things got to be this bad ... It wouldn't surprise me if it wins a Pulitzer ... Essential' The Times. 'Shifting effortlessly between the socio-political and the personal, Macy weaves a complex tale that unfolds with all the pace of a thriller, her deep journalism - interviews with dealers, police officers, activists, local politicians as well as users and their families - matched by a sense of barely suppressed anger at what is happening ... It may make you weep; it will almost certainly make you angry' Observer. 'Comprehensive, compassionate and forceful. No matter what you already know about the opioid crisis, its toughness and intimacy make it a must' New York Times, Critics' Picks of the Year. 'Macy's harrowing account of the opioid epidemic, in which hundreds of thousands have already died, masterfully interlaces stories of communities in crisis with dark histories of corporate greed and regulatory indifference' New York Times, Books of the Year. 'Macy's reportage shows how unscrupulous drug companies helped to hook America on painkillers. Drugs are the leading cause of death for the under-fifties, above guns and car accidents; Macy puts human faces on to the grim statistics' The Times, Books of the Year. 'A gripping, heartbreaking and enraging tale of ruined lives and the corporate greed that led to a nationwide epidemic of painkiller addiction' The Oldie. 'Essential to understanding not just the epidemic of opioid addiction and death, but also how America and Big Pharma work ... Macy's narrative is a mosaic of suffering and bereavement' Literary Review. 'Beth Macy's powerful work of reportage ... Dopesick goes to the heart of one of the most urgent problems of our time' The Tablet. 'A crucial and many-faceted look at a still-unfolding national crisis ... A timely and necessary read' Booklist. 'Macy potently mixes statistics and hard data with tragic stories of individual sufferers, as well as those who love and attempt to treat them ... Forceful and comprehensive' Publishers Weekly. 'An urgent, eye-opening look at a problem that promises to grow much worse in the face of inaction and indifference' Kirkus. 'Beth Macy seeks the very hearts of the people who are running the long marathons of struggle and survival - of Life. Dopesick is another deep - and deeply needed - look into the troubled soul of America' Tom Hanks. 'Essential reading ... Macy follows one specific drug through the range of problems it has caused, the people it has hurt, the difficulties in fighting it and the glimmers of hope that remain' Janet Maslin, New York Times. 'A shocking investigation ... [Dopesick] is essential. The urgency of its message is compounded by the fact that as I write this, the latest figures show the number of deaths in England and Wales due to the synthetic opioid fentanyl rose by 29 per cent in 2017' The Times.

Beth Macy is the author of the widely acclaimed and bestselling books Truevine and Factory Man. Based in Roanoke, Virginia for three decades, her reporting has won more than a dozen national awards, including a Nieman Fellowship for Journalism at Harvard.