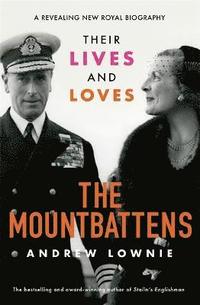 av Andrew Lownie
Inbunden Engelska, 2019-08-22
259
Bevaka
Spara som favorit
Tillfälligt slut – klicka "Bevaka" för att få ett mejl så fort boken går att köpa igen.
Finns även som
Visa alla 1 format & utgåvor
The Top Ten Sunday Times Bestseller 'Richly entertaining... impressively well-researched' Daily Mail, Biography of the Year 'Incisive... strongly recommend' The Times 'A study in aggressive social climbing [with] quick-moving fluency' Sunday Times 'Painstakingly researched... genuinely enthralling' Observer 'A page-turner which is also a carefully researched work of history' Spectator 'A compelling new biography...superbly researched' Daily Express 'Everything a top-notch biography should be' Budapest Times 'Well-researched, enjoyable, revealing' The Oldie ************************ The intimate story of a unique marriage that spans the heights of glamour and power to infidelity, manipulation and disaster through the heart of the 20th century. DICKIE MOUNTBATTEN: A major figure behind his nephew Philip's marriage to Queen Elizabeth II and instrumental in the Royal Family taking the Mountbatten name, he was Supreme Allied Commander of South East Asia during World War II and the last Viceroy of India. EDWINA MOUNTBATTEN: Once the richest woman in Britain and a playgirl who enjoyed numerous affairs, she emerged from World War II as a magnetic and talented humanitarian worker loved around the world. From British high society to the South of France, from the battlefields of Burma to the Viceroy's House, The Mountbattens is a rich and filmic story of a powerful partnership, revealing the truth behind a carefully curated legend. Was Mountbatten one of the outstanding leaders of his generation, or a man over-promoted because of his royal birth, high-level connections, film-star looks and ruthless self-promotion? What is the true story behind controversies such as the Dieppe Raid and Indian Partition, the love affair between Edwina and Nehru, and Mountbatten's assassination in 1979? Based on over 100 interviews, research from dozens of archives and new information released under Freedom of Information requests, prize-winning historian Andrew Lownie sheds new light on this remarkable couple.
Visa hela texten

One of the few joys of lockdown for me. Lownie is an unusual biographer in that he is at once a great investigative journalist, but also a fine writer. * Tim Walker, journalist and broadcaster * A compelling new biography... superbly researched * Daily Express * A study in aggressive social climbing [with] quick-moving fluency * Sunday Times * A page-turner... a carefully researched work of history * Spectator * Richly entertaining... impressively well-researched. An enthralling portrait of two complex individuals whose public and private lives were somewhat inextricably entwined * Daily Mail Biography of the Year & Daily Mail 'Must Reads' * Incisive... strongly recommend * Times * This painstakingly researched dual account of Louis and Edwina Mountbatten is genuinely enthralling... A fitting tribute to two complex people * Observer * By dint of prodigious research, Lownie has stripped away the accretions of fable and fiction to give us an unvarnished double portrait. It is vivid, well balanced and often sympathetic * Literary Review * A well-balanced portrait of flawed individuals... The book promises scandal and does not disappoint. Lownie's book dares to go where no other Mountbatten biography has gone before. An explosive account that looks behind the facade of a celebrated couple * The Lady, 5 stars * Well-researched, enjoyable... [a] fair-minded and revealing book * Jane Ridley, The Oldie * Everything a top-notch biography should be * Budapest Times * A fine blend of political, military, and personal history. * Hindustani Times * Well-written and reads very easily....a valuable warts and all portrait of a couple who were centre stage in British public life for some sixty years. Recommended * The Naval Review * This is a must-read for anyone drawn to explore the story of the Mountbattens. A compelling book packed with fascinating new material, brilliantly told. * Robert Jobson, Royal correspondent * A complex story beautifully written which never felt less like a history lesson, but I learned so much by the end. A triumph of storytelling. * Anne Sebba, biographer of Wallis Simpson * An audacious, myth-busting book by a master biographer (determined to get to the truth). * Rhiannon Jenkins Tsang, author The Last Vicereine * A timely debunking of the golden Mountbatten myth. Meticulously researched and beautifully written, Lownie's portrait of a deeply flawed man and his extraordinary marriage is an irresistible read. * Robert Beaumont * Contains many fresh social and political insights into an important subject, revealed in a gripping and detailed narrative. * Richard Thorpe, biographer of Anthony Eden and Harold Macmillan * Impeccably researched and with freshly revealed correspondence that throws a new light on one of the most interesting figures of our times, this is an important double biography * Anne de Courcy, author Snowdon * An entertaining, knowledgeable account of the extraordinary official, sexual and social lives of royal relative, Earl Mountbatten, and his multi-millionairess wife, Lady Edwina. * Sarah Bradford, Royal biographer * Illuminating...brilliant * Gentleman's Quarterly * A brilliant book! Here's 'Uncle Dickie' as he's never been revealed before * Robert Lacey, author of Majesty * Wherever a reader turns in this magnificent book there are new ideas to consider. Lownie's writing fits the complex nature of his subject yet is always completely unambiguous. I loved this book. * Queensland Reviewers Collective * Acute observations, careful analysis and skilful articulation * Royal History Geeks * A remarkable and definitive portrait * Frederick Forsyth on Stalin's Englishman * Shrewd, thorough, revelatory * William Boyd on Stalin's Englishman * [Lownie] manages to convey the charm as well as the turpitude * Craig Brown on Stalin's Englishman * Exhaustively researched and absorbing book * New Statesman on Stalin's Englishman * A meticulously researched biography...an astonishing piece of research * Sun

Andrew Lownie was educated at Magdalene College, Cambridge, where he was Dunster History Prizeman and President of the Union, before taking his Masters and doctorate at Edinburgh University. A Fellow of the Royal Historical Society and former visiting fellow of Churchill College, Cambridge, he has run his own literary agency since 1988. A trustee of the Campaign for Freedom of Information and President of The Biographers Club, he has written for the Times, Telegraph, Wall Street Journal, Spectator and Guardian and formerly served in the Royal Naval Reserve.