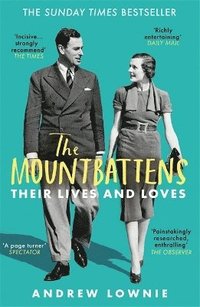 av Andrew Lownie
Häftad Engelska, 2020-06-25
125
Köp
Spara som favorit
Skickas inom 5-8 vardagar.
Gratis frakt inom Sverige över 159 kr för privatpersoner.
Finns även som
Visa alla 1 format & utgåvor
The Top Ten Sunday Times Bestseller 'Richly entertaining... impressively well-researched' Daily Mail, Biography of the Year 'Incisive... strongly recommend' The Times 'A study in aggressive social climbing [with] quick-moving fluency' Sunday Times 'Painstakingly researched... genuinely enthralling' Observer 'A page-turner which is also a carefully researched work of history' Spectator 'A compelling new biography...superbly researched' Daily Express 'Everything a top-notch biography should be' Budapest Times 'Well-researched, enjoyable, revealing' The Oldie ************************ The intimate story of a unique marriage that spans the heights of glamour and power to infidelity, manipulation and disaster through the heart of the 20th century. DICKIE MOUNTBATTEN: A major figure behind his nephew Philip's marriage to Queen Elizabeth II and instrumental in the Royal Family taking the Mountbatten name, he was Supreme Allied Commander of South East Asia during World War II and the last Viceroy of India. EDWINA MOUNTBATTEN: Once the richest woman in Britain and a playgirl who enjoyed numerous affairs, she emerged from World War II as a magnetic and talented humanitarian worker loved around the world. From British high society to the South of France, from the battlefields of Burma to the Viceroy's House, The Mountbattens is a rich and filmic story of a powerful partnership, revealing the truth behind a carefully curated legend. Was Mountbatten one of the outstanding leaders of his generation, or a man over-promoted because of his royal birth, high-level connections, film-star looks and ruthless self-promotion? What is the true story behind controversies such as the Dieppe Raid and Indian Partition, the love affair between Edwina and Nehru, and Mountbatten's assassination in 1979? Based on over 100 interviews, research from dozens of archives and new information released under Freedom of Information requests, prize-winning historian Andrew Lownie sheds new light on this remarkable couple.
Visa hela texten

One of the few joys of lockdown for me. Lownie is an unusual biographer in that he is at once a great investigative journalist, but also a fine writer. * Tim Walker, journalist and broadcaster * Richly entertaining... impressively well-researched * Daily Mail, Biography of the Year * Incisive... strongly recommend * The Times * A study in aggressive social climbing [with] quick-moving fluency * Sunday Times * Painstakingly researched... genuinely enthralling * Observer * A page-turner which is also a carefully researched work of history * Spectator * A compelling new biography...superbly researched * Daily Express * Everything a top-notch biography should be * Budapest Times * Well-researched, enjoyable, revealing * The Oldie * By dint of prodigious research, Lownie has stripped away the accretions of fable and fiction to give us an unvarnished double portrait. It is vivid, well balanced and often sympathetic * Literary Review * A well-balanced portrait of flawed individuals... The book promises scandal and does not disappoint. Lownie's book dares to go where no other Mountbatten biography has gone before. An explosive account that looks behind the facade of a celebrated couple * The Lady, 5 stars * Wherever a reader turns in this magnificent book there are new ideas to consider. Lownie's writing fits the complex nature of his subject yet is always completely unambiguous. I loved this book. * Queensland Reviewers Collective *

Andrew Lownie was educated at Magdalene College, Cambridge, where he was Dunster History Prizeman and President of the Union, before taking his Masters and doctorate at Edinburgh University. A Fellow of the Royal Historical Society and former visiting fellow of Churchill College, Cambridge, he has run his own literary agency since 1988. A trustee of the Campaign for Freedom of Information and President of The Biographers Club, he has written for the Times, Telegraph, Wall Street Journal, Spectator and Guardian and formerly served in the Royal Naval Reserve.