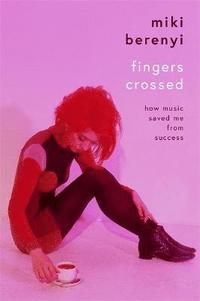 Fingers Crossed: How Music Saved Me from Success

Rough Trade Book of the Year

av Miki Berenyi
Inbunden Engelska, 2022-09-29
239
Köp
Spara som favorit
Finns även som
Visa alla 1 format & utgåvor
Rough Trade Book of the Year Resident Book of the Year A Rolling Stone Book of the Year A Mojo Book of the Year A Sunday Times Book of the Year Formed in 1988, Lush were part of the London gig scene during one of the most vibrant and creative periods in UK music. Now, Miki Berenyi tells all. From the bohemian ways of her father's social circle to the privileged glamour of her mother's acting career, Miki's young life was a blur of travel, celebrities and peripatetic schooling. But frequent relocation, parental neglect and the dark presence of her abusive grandmother resulted in crippling shyness, mental-health issues and a vulnerability to exploitation. The route out of this hole was music - a passion shared by schoolmate Emma Anderson. The teenagers began attending gigs together and would ultimately go on to form Lush. Talented and exuberant, the band became hot property, swiftly transitioning from shoegaze icons to Britpop darlings. Re-living the tours, recording sessions and music-industry madness they experienced along the way, this uncompromising memoir documents Lush's thrilling rise and untimely fall. Yet at the heart of the book are Miki's own battles: the conflict between her mouthy public persona and her thin-skinned private identity; the trials of being a woman in an infuriatingly male world; the struggle to find a middle ground between 'safe' indie obscurity and 'sell-out' international success. Miki also explores her complicated relationship with Emma - one that has fluctuated between camaraderie and rivalry over the years - and addresses the devastating tragedy that led to the band's split. Told through frank confession, wry humour and searing emotional honesty, this is the incredible tale of a trailblazing woman and a seminal band.
Visa hela texten

'So relatable, so poignant, so emotionally intense, it's an irresistible rush of a book.' -- Rolling Stone 'A great memoir requires an extraordinary life story and the ability to write it. Miki has been blessed with both. Compelling. Funny. Vivid. 4/5' -- Mojo 'This is quite the revelation ... infinitely superior to the average rock autobiography ... the most candid, full-disclosure demystification of the indie scene you'll ever read. This is special, a superbly written book about a vanished world and so much more. 5/5' -- Record Collector 'A beautifully written memoir.' -- Stylist 'A remarkable, revelatory memoir.' -- Will Hodgkinson, The Times 'Fiercely honest and emotionally acute ... Fingers Crossed breaks the mould of music memoir ... Berenyi's writing is characterised by arch humour and a delight in the absurd.' -- Fiona Sturgess, The Guardian 'Fingers Crossed provides a salutary corrective to a much mythologised musical era; it's often extremely funny. But it's also a nuanced portrait of personal survival.' -- Kitty Empire, The Observer 'Intelligent and searingly candid.' -- Grazia 'Miki writes beautifully with soul and humour. A brilliant, engaging read. 8/10' -- Classic Rock 'I felt like I was on the rollercoaster with Miki, from making mixtapes with her school friends to the wild dream of making it as a pop star. It's a gripping and delightful read even as, without an ounce of self-pity the bright energy of Miki's star is always tailed by darkness - the neglect and worse of an abusive childhood and the misogyny and exploitation that hangs like a pall over the Britpop years. A thrilling, moving and essential book for anyone who grew up in love with pop music.' -- Samira Ahmed 'Extremely colourful and dramatic.' -- Mark Ellen 'Brave and forthright. It instils in you the thing most necessary from a musician's memoir: the urgent need to play the records again.' -- John Niven 'This is extraordinarily good. A memoir that reads like a novel, full of vivid characters, wild highs and lows and brutal honesty. And it's the single best thing I've read on the sexism and toxicity at the heart of Britpop.' -- Matt Osman, Suede 'A tumultuous childhood and chaotic coming of age propel Miki in to the famously stable world of rock and roll. Beautifully and movingly written, this is a hugely entertaining read.' -- Shaun Keaveny 'Miki tells it like it was, warts and all. Most of it's warts actually.' -- Steve Rippon, Lush 'A powerful, emotional journey intensely well told. All other autobiographies should be judged against it.' * Louder than War * 'Honest and brilliantly written.' * We Are Cult * 'Few autobiographies depict the highs and lows with quite the merciless clarity as Fingers Crossed.' * The Monocle * 'A great life story combined with excellent recall and refreshingly honest writing is a bonus when it comes to any memoir, but the superb Fingers Crossed achieves brownie points by delivering details with real dexterity.' * Irish Times * 'A really incredible book.' -- Skin, Skunk Anansie '*****' * The Sun * 'By far the best music memoir of 2022. An utterly riveting peek into an extraordinary early life.' -- i-Paper 'You will laugh, you will cry, you might never, ever form a band.' -- Virgin Radio

Miki Eleonora Berenyi is an English singer, songwriter and guitarist best known as a member of the alternative-rock band Lush. She is currently a member of Piroshka, who released their second album in July 2021.