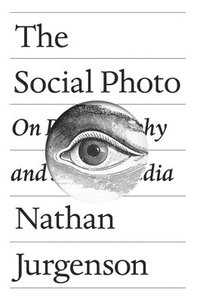 On Photography and Social Media

av Nathan Jurgenson
Inbunden Engelska, 2019-04-30
145
Köp
Spara som favorit
Skickas inom 5-8 vardagar.
Gratis frakt inom Sverige över 159 kr för privatpersoner.
Finns även som
Visa alla 2 format & utgåvor
With the rise of the smart phone and social media, cameras have become ubiquitous, infiltrating nearly every aspect of social life. The glowing camera screen is the lens by which many of us apprehend and communicate our experience. But our thinking about photography has been slow to catch up; this major fixture of everyday life is still often treated in the terms of art or journalism. In The Social Photo, social theorist Nathan Jurgenson develops bold new ways of understanding the transformations wrought by these image-making and sharing technologies and the cultural objects they have ushered in: the selfie, the faux-vintage photo, the self-destructing image, the food photo. Jurgenson shows how these devices and platforms have remade the world and our understanding of ourselves within it.
Visa hela texten

"A textual portrait of a visual medium, The Social Photo entices the reader to view social media through the lens of cultural critique. Ethereal and provocative, as rich as it is succulent." Danah Boyd, author of It's Complicated: The Social Lives of Networked Teens "Nathan Jurgenson is the Susan Sontag of the selfie generation-a bold, lucid, and important new voice in cultural criticism. In The Social Photo, he offers a truly groundbreaking analysis of how photography has changed in the age of social media, and how it is changing us. Every page crackles with insight and intelligence" - Mia Fineman, Curator of Photographs, Metropolitan Museum of Art and author of Faking It: Manipulated Photography Before Photoshop "Social photos are not primarily about making media but about sharing eyes,' Nathan Jurgenson writes in this important and timely book. Grappling with the significance of the billions of largely ephemeral images that inhabit social media, he persuasively delineates many of the key boundaries between what was previously understood to be photography and the contemporary image environment." - Fred Ritchin, author of Bending the Frame: Photojournalism, Documentary, and the Citizen "The world is glutted with pictures ... In The Social Photo, sociologist, media theorist, and Snapchat guru Nathan Jurgenson argues that this surfeit of images has ushered in a new way of seeing and existing in the world through our camera phones - one which no longer values the documentary function of photographs, but instead prizes their ability to expressively communicate with others." - Frieze "A refreshing respite from most of the commentary streaming from our devices today." - Tim Bradshaw, Financial Times "[Jurgenson] has, for years, offered a valuable commentary on the cultural implications of social media." - TANK Magazine, Summer Reads

Nathan Jurgenson is a social media theorist. He is co-founder and co-chair of the annual Theorizing the Web conference, founder and editor in chief of Real Lifemagazine, editor emeritus at The New Inquiry, and a sociologist at Snap Inc. His work, which appears in academic journals and popular outlets, centers on a critique of "digital dualism," a phrase he coined to describe the false belief that the internet is a separate virtual sphere or cyber space. Instead, Nathan approaches digitality as embodied, material, and real.