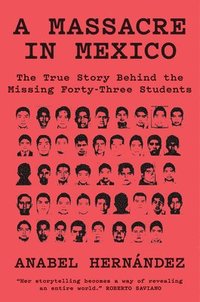 A Massacre in Mexico

The True Story Behind the Missing Forty Three

av Anabel Hernandez
Inbunden Engelska, 2018-10-16
209
Köp
Spara som favorit
Finns även som
Visa alla 4 format & utgåvor
On September 26, 2014, 43 male students from the Ayotzinapa Rural Teachers' College went missing in Iguala, Guerrero, Mexico. On route to a protest, local police intercepted the students and a confrontation ensued. By the morning, they had disappeared without a trace. Hernandez reconstructs almost minute-by-minute the events of those nights in late September 2014, giving us what is surely the most complete picture available: her sources are unparalleled, since she has secured access to internal government documents that have not been made public, and to video surveillance footage the government has tried to hide and destroy. Hernandez demolishes the Mexican state's official version, which the Pena Nieto government cynically dubbed the "historic truth". As her research shows, state officials at all levels, from police and prosecutors to the upper echelons of the PRI administration, conspired to put together a fake case, concealing or manipulating evidence, and arresting and torturing dozens of "suspects" who then obliged with full "confessions" that matched the official lie. By following the role of the various Mexican state agencies through the events in such remarkable detail, Massacre in Mexico shows with exacting precision who is responsible for which component of this monumental crime.
Visa hela texten

"A Massacre in Mexico is a harrowing inquisition in to the fate of forty-three missing Mexican students and the governmental cover-up...This is sure to be a controversial, significant work, one that might anger more than a few powerful people in Mexico. Anabel Hernandez valiantly risks her safety to uncover a crime that the world shouldn't forget." - Mya Alexice "A harrowing inquisition into the fate of forty-three missing Mexican students and the governmental cover-up... Hernandez delves deep into the corruption and violence despite threats against her life." - Foreword Reviews "It is the most comprehensive account of what is known about the attack - and about the astonishingly corrupt government investigation that followed... A Massacre in Mexico presents an overwhelming case that federal government investigators working for the administration of Mexican president Enrique Pena Nieto created a false narrative of local culpability and sought to close the case before an investigation could reveal the involvement of federal officials." - Christy Thornton, Jacobin

Anabel Hernandez is one of Mexico's leading investigative journalists. She has worked on national dailies including Reforma, Milenio, El Universal and its investigative supplement La Revista. Her previous books including the award winning Narcoland, La familia presidencial, Fin de fiesta en los pinos, and Los complices del presidente.In awarding Hernandez the 2012 Golden Pen of Freedom, the World Association of Newspapers and News Publishers noted, Mexico has become one of the most dangerous countries in the world for journalists, with violence and impunity remaining major challenges in terms of press freedom. In making this award, we recognize the strong stance Ms. Hernandez has taken, at great personal risk, against drug cartels."