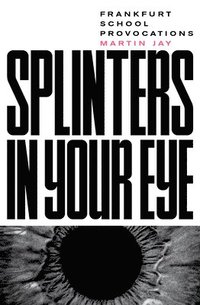 Splinters in Your Eye

av Martin Jay
Häftad Engelska, 2020-07-14
210
Köp
Spara som favorit
Skickas inom 10-15 vardagar.
Fri frakt inom Sverige för privatpersoner.
Finns även som
Visa alla 1 format & utgåvor
Although successive generations of the Frankfurt School have attempted to adapt Critical Theory to new circumstances, the work done by its founding members continues in the 21st century to unsettle conventional wisdom about culture, society and politics. Exploring unexamined episodes in the School's history and reading its work in unexpected ways, these essays provide ample evidence of the abiding relevance of Horkheimer, Adorno, Benjamin, Marcuse, Loewenthal, and Kracauer in our troubled times. Without forcing a unified argument, they range over a wide variety of topics, from the uncertain founding of the School to its mixed reception of psychoanalysis, from Benjamin's ruminations on stamp collecting to the ironies in the reception of Marcuse's One-Dimensional Man, from Loewenthal's role in Weimar's Jewish Renaissance to Horkheimer's involvement in the writing of the first history of the Frankfurt School. Of special note are their responses to visual issues such as the emancipation of color in modern art, the Jewish prohibition on images, the relationship between cinema and the public sphere, and the implications of a celebrated Family of Man photographic exhibition. The collection ends with two essays tracing the still metastasizing demonization of the Frankfurt School by the so-called Alt Right as the source of "cultural Marxism" and "political correctness," which has gained alarming international resonance and led to violence by radical right-wing fanatics.
Visa hela texten

"In this sizzling collection of essays, Martin Jay demonstrates again that he is the unsurpassed reader of the group of thinkers known as the "Frankfurt School." In fact, he challenges the false unity and coherence of ideas and views often imposed upon them, including his own earlier writings on the subject. Practicing episodic and fragmentary historiography, he uncovers astonishingly novel angles of interpretation as well as demonstrating brilliant re-readings of known texts. An absolute pleasure to read" - Professor Seyla Benhabib "With this collection of brilliant and insightful essays Martin Jay has returned to the topic that defined his early career: Critical Theory, i.e. the lives and works of theorists such as Adorno, Horkheimer, Benjamin, Kracauer, and Marcuse. Based on deep historical knowledge and endowed with great sensitivity for theoretical nuances, Jay traces the unfolding of what is commonly called the Frankfurt School. He succeeds in this endeavor by his refusal to treat their thought as the expression of a unified school. For this difficult task one could not have found a more suitable critic than Martin Jay. This book is a precious gift to America in these troubled times." - Peter Uwe Hohendahl "Splinters in Your Eye provides ample evidence of the abiding relevance of Horkheimer, Adorno, Benjamin, Marcuse, Loewenthal, and Kracauer in our troubled times." - Ryan Tripp, New Books Network