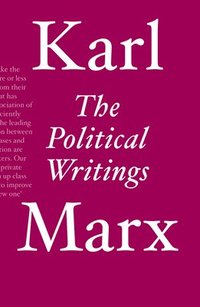 av Karl Marx
Häftad Engelska, 2019-09-03
309
Köp
Spara som favorit
Skickas inom 5-8 vardagar.
Gratis frakt inom Sverige över 159 kr för privatpersoner.
Finns även som
Visa alla 1 format & utgåvor
Karl Marx was not only the great theorist of capitalism, he was also a superb journalist, politician and historian. For the first time ever, this book brings together all of his essential political and historical writings in one volume. These writings allow us to see the depth and range of Marx's mature work from the tumultuous revolutions of 1848 that rocked European society through to the end of his life. Including The Communist Manifesto, The Class Struggles in France and The Critique of the Gotha Programme, this volume shows Marx at his most astute, analysing the forces of global capitalism as they played out in actual events.
Visa hela texten

Karl Marx was born in 1818, in the Rhenish city of Trier, the son of a successful lawyer. He studied law and philosophy at the universities of Bonn and Berlin, completing his doctorate in 1841. In Paris three years later, Marx was introduced to the study of political economy by a former fellow student, Frederick Engels. In 1848 they collaborated in writing The Communist Manifesto. Expelled from Prussia in the same year, Marx took up residence first in Paris and then in London where, in 1867 he published his magnum opus Capital. A co-founder of the International Workingmen's Association in 1864, Marx died in London in 1883.