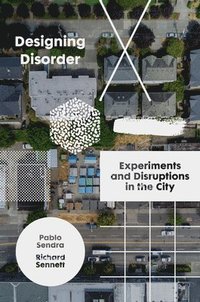 Experiments and Disruptions in the City

av Pablo Sendra, Richard Sennett
Inbunden Engelska, 2020-04-07
163
Köp
Spara som favorit
Finns även som
Visa alla 3 format & utgåvor
A manifesto for the Open City: vibrant, disordered, adaptable. In 1970 Richard Sennett published the ground breaking The Uses of Disorder, that the ideal of a planned and ordered city was flawed, likely to produce a fragile, restrictive urban environment. Fifty years later, Sennett returns to these still fertile ideas and alongside campaigner and architect, Pablo Sendra, sets out an agenda for the design and ethics of the Open City. The public spaces of our cities are under siege from planners, privatisation and increased surveillance. Our streets are becoming ever more lifeless and ordered. What is to be done? Can disorder be designed? Is it possible to maintain the public realm as a flexible space that adapts over time? In this provocative essay Sendra and Sennett propose a reorganisation of how we think and plan the social life of our cities. What the authors call 'Infrastructures of disorder' combine architecture, politics, urban planning and activism in order to develop places that nurture rather than stifle, bring together rather than divide up, remain open to change rather than closed off. The book proves that ideas of disorder are still some of the most radical and transformative in debates on 21st century cities.
Visa hela texten

"In this very readable essay, Sennett pushes on the ideas he developed in his 'Uses of Disorder'. The upshot seems to be the 'open city'; the antithesis of places like New York's Hudson Yards; a pre-determined, real-estate driven 'community' that can only degrade over time. Given contingent times, a necessary critical view of the modern urban realm." - RIBA Journal "The promotion of this sense of impotence, and the resulting inertia, are encouraged by a patronising capitalist "nanny state" on behalf of corporations for whom profits, not people, matter. The only antidote to that inertia is surely to start planning the "disorder" promulgated by Sendra and Sennett.'" - Morning Star "Timely and relevant...For both Sennett and Sendra, cities are at their best when they resist homogeneity and promote difference, and when they empower people to actively shape and reshape their built environment and its public uses." - Eoin O Broin, Irish Times "A bold invitation to take sides ... a city of power (Hudson Yards) versus a city of the people (the Garment District in New York City), before formulating the no less audacious goal of the book: to enable urban spontaneity by means of design" - Placido Gonzalez Martinez, Journal of Urban Design "This book can be seen as an ongoing and open-ended conversation rather than a static presentation of the authors' points of view ... a very lively and engaging read." - Judith Ryser, Urban Design "I thought of my home town, Dublin, while reading Pablo Sendra and Richard Sennett's Designing Disorder: Experiments and Disruptions in the City. Here, the authors explore ethical urban design in an age of privatisation, hostile architecture and widespread surveillance." - Naoise Dolan, Observer, Best Books of 2020

Pablo Sendra is Lecturer in Planning and Urban Design at The Bartlett School of Planning, University College London. He is also co-founder and partner of the urban design practice Lugadero and co-founder of the network CivicWise. He develops action research projects and radical teaching in collaboration with community groups and activists in London. He is co-author (with Daniel Fitzpatrick) of Community-Led Regeneration (2020) and co-editor (with Maria Joao Pita and Civicwise) of Civic Practices (2017). Richard Sennett's first book was The Uses of Disorder, in 1970. His previous books include The Fall of Public Man, Flesh and Stone and Respect, as well as the recent Homo Faber trilogy, The Craftsman, Together, Building and Dwelling. For decades he has advised urban programmes for the United Nations, and has also worked as a planner for poor communities. He now teaches urban studies at the London School of Economics and at Harvard University. He has been awarded the Hegel and Spinoza prizes, as well as an honorary doctorate by Cambridge University.