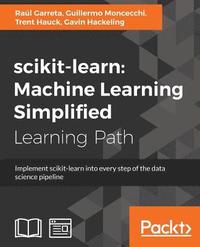 av Raul Garreta, Guillermo Moncecchi, Trent Hauck, Gavin Hackeling
Häftad Engelska, 2017-11-10
1289
Köp
Spara som favorit
Skickas inom 10-15 vardagar.
Gratis frakt inom Sverige över 159 kr för privatpersoner.
Finns även som
Visa alla 1 format & utgåvor
Implement scikit-learn into every step of the data science pipeline About This Book * Use Python and scikit-learn to create intelligent applications * Discover how to apply algorithms in a variety of situations to tackle common and not-so common challenges in the machine learning domain * A practical, example-based guide to help you gain expertise in implementing and evaluating machine learning systems using scikit-learn Who This Book Is For If you are a programmer and want to explore machine learning and data-based methods to build intelligent applications and enhance your programming skills, this is the course for you. No previous experience with machine-learning algorithms is required. What You Will Learn * Review fundamental concepts including supervised and unsupervised experiences, common tasks, and performance metrics * Classify objects (from documents to human faces and flower species) based on some of their features, using a variety of methods from Support Vector Machines to Naive Bayes * Use Decision Trees to explain the main causes of certain phenomena such as passenger survival on the Titanic * Evaluate the performance of machine learning systems in common tasks * Master algorithms of various levels of complexity and learn how to analyze data at the same time * Learn just enough math to think about the connections between various algorithms * Customize machine learning algorithms to fit your problem, and learn how to modify them when the situation calls for it * Incorporate other packages from the Python ecosystem to munge and visualize your dataset * Improve the way you build your models using parallelization techniques In Detail Machine learning, the art of creating applications that learn from experience and data, has been around for many years. Python is quickly becoming the go-to language for analysts and data scientists due to its simplicity and flexibility; moreover, within the Python data space, scikit-learn is the unequivocal choice for machine learning. The course combines an introduction to some of the main concepts and methods in machine learning with practical, hands-on examples of real-world problems. The course starts by walking through different methods to prepare your data-be it a dataset with missing values or text columns that require the categories to be turned into indicator variables. After the data is ready, you'll learn different techniques aligned with different objectives-be it a dataset with known outcomes such as sales by state, or more complicated problems such as clustering similar customers. Finally, you'll learn how to polish your algorithm to ensure that it's both accurate and resilient to new datasets. You will learn to incorporate machine learning in your applications. Ranging from handwritten digit recognition to document classification, examples are solved step-by-step using scikit-learn and Python. By the end of this course you will have learned how to build applications that learn from experience, by applying the main concepts and techniques of machine learning. Style and Approach Implement scikit-learn using engaging examples and fun exercises, and with a gentle and friendly but comprehensive "learn-by-doing" approach. This is a practical course, which analyzes compelling data about life, health, and death with the help of tutorials. It offers you a useful way of interpreting the data that's specific to this course, but that can also be applied to any other data. This course is designed to be both a guide and a reference for moving beyond the basics of scikit-learn.
Visa hela texten

Raul Garreta is a Computer Engineer with much experience in the theory and application of Artificial Intelligence (AI), where he specialized in Machine Learning and Natural Language Processing (NLP). He has an entrepreneur profile with much interest in the application of science, technology, and innovation to the Internet industry and startups. He has worked in many software companies, handling everything from video games to implantable medical devices. In 2009, he co-founded Tryolabs with the objective to apply AI to the development of intelligent software products, where he performs as the CTO and Product Manager of the company. Besides the application of Machine Learning and NLP, Tryolabs' expertise lies in the Python programming language and has been catering to many clients in Silicon Valley. Raul has also worked in the development of the Python community in Uruguay, co-organizing local PyDay and PyCon conferences. He is also an assistant professor at the Computer Science Institute of Universidad de la Republica in Uruguay since 2007, where he has been working on the courses of Machine Learning, NLP, as well as Automata Theory and Formal Languages. Besides this, he is finishing his Masters degree in Machine Learning and NLP. He is also very interested in the research and application of Robotics, Quantum Computing, and Cognitive Modeling. Not only is he a technology enthusiast and science fiction lover (geek) but also a big fan of arts, such as cinema, photography, and painting. Guillermo Moncecchi is a Natural Language Processing researcher at the Universidad de la Republica of Uruguay. He received a PhD in Informatics from the Universidad de la Republica, Uruguay and a Ph.D in Language Sciences from the Universite Paris Ouest, France. He has participated in several international projects on NLP. He has almost 15 years of teaching experience on Automata Theory, Natural Language Processing, and Machine Learning. He also works as Head Developer at the Montevideo Council and has lead the development of several public services for the council, particularly in the Geographical Information Systems area. He is one of the Montevideo Open Data movement leaders, promoting the publication and exploitation of the city's data. Trent Hauck is a data scientist living and working in the Seattle area. He grew up in Wichita, Kansas and received his undergraduate and graduate degrees from the University of Kansas. He is the author of the book Instant Data Intensive Apps with pandas How-to, Packt Publishing-a book that can get you up to speed quickly with pandas and other associated technologies. Gavin Hackeling develops machine learning services for large-scale documents and image classification at an advertising network in New York. He received his Master's degree from New York University's Interactive Telecommunications Program, and his Bachelor's degree from the University of North Carolina.