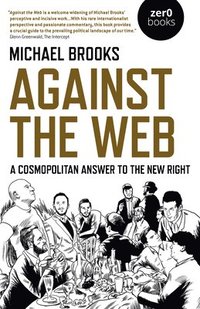 Against the Web - A Cosmopolitan Answer to the New Right

av Michael Brooks
Häftad Engelska, 2020-04-24
102
Köp
Spara som favorit
Skickas inom 7-10 vardagar.
Gratis frakt inom Sverige över 159 kr för privatpersoner.
"A brilliant critique of the Right with very sharp insight on some of the shortcomings of the Left, this book is a must-read for anyone looking to understand how dishonest actors spread their propaganda." Ana Kasparian, Host and Executive Producer of The Young Turks Michael Brooks takes on the new "Intellectual Dark Web". As the host of The Michael Brooks Show and co-host of the Majority Report, he lets his understanding of the new media environment direct his analysis of the newly risen conservative rebels who have taken YouTube by storm. Brooks provides a theoretically rigorous but accessible critique of the most prominent "renegades"; including Sam Harris, Jordan Peterson, and Brett Weinstein while also examining the social, political and media environment that these rebels thrive in.
Visa hela texten

Michael Brooks was the host of the Michael Brooks Show and contributing host for the four-time award-winning independent political talk show, The Majority Report. He was also briefly the co-host, along with Anna Kasparian, on a new YouTube show for Jacobin Magazine entitled Weekends. His writing appeared in Al Monitor, Al Jazeera, The Washington Post, among other publications. Upon Brooks passing the former president of Brazil, Luiz Inacio Lula da Silva, expressed his condolences: "May his passion for social justice be remembered and inspire people around the world."