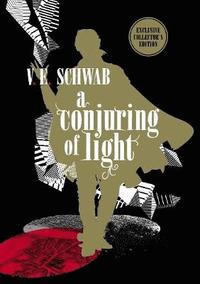 av V E Schwab
Inbunden Engelska, 2019-10-01
203
Köp
Spara som favorit
Finns även som
Visa alla 1 format & utgåvor
Continue V. E. Schwab's New York Times bestselling Shades of Magic series with A Conjuring of Light, now in a beautiful collector's edition. The precarious equilibrium among the four Londons has reached its breaking point. Once brimming with the red vivacity of magic, darkness casts a shadow over the Maresh Empire, leaving a space for another London to rise. Kell-once assumed to be the last surviving Antari-begins to waver under the pressure of competing loyalties. Lila Bard, once a commonplace-but never common-thief, has survived and flourished through a series of magical trials. But now she must learn to control the magic, before it bleeds her dry. Meanwhile, the disgraced Captain Alucard Emery and the Night Spire crew are attempting a race against time to acquire the impossible, as an ancient enemy returns to claim a crown and a fallen hero is desperate to save a decaying world...
Visa hela texten

V.E. Schwab is the No.1 New York Times bestselling author of multiple novels, including This Savage Song and the Darker Shade of Magic series, whose first book was described as "a classic work of fantasy" by Deborah Harkness. It was one of Waterstones' Best Fantasy Books of 2015 and one of The Guardian's Best Science Fiction novels. The Independent has called her "The natural successor to Diana Wynne Jones."