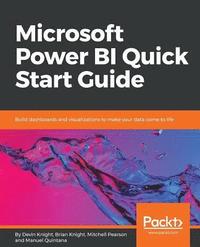 Build dashboards and visualizations to make your data come to life

av Devin Knight, Brian Knight, Mitchell Pearson, Manuel Quintana
Häftad Engelska, 2018-07-30
469
Köp
Spara som favorit
Skickas inom 10-15 vardagar.
Fri frakt inom Sverige för privatpersoner.
Bring your data to life with Power BI Key Features Get to grips with the fundamentals of Microsoft Power BI and its Business Intelligence capabilities Build accurate analytical models, reports and dashboards Get faster and more intuitive insights from your data using Microsoft Power BI Book DescriptionMicrosoft Power BI is a cloud-based service that helps you easily visualize and share insights using your organization's data.This book will get you started with business intelligence using the Power BI toolset, covering essential concepts such as installation,designing effective data models, as well as building basic dashboards and visualizations to make your data come to life You will learn how to get your data the way you want - connecting to data sources sources and how to clean your data with the Power BI Query Editor. You will next learn how to properly design your data model to make your data easier to work with.. You will next learn how to properly design your data model to navigate table relationships and build DAX formulas to make your data easier to work with. Visualizing your data is another key element of this book, and you will learn how to follow proper data visualization styles and enhanced digital storytelling techniques. By the end of this book, you will understand how to administer your organization's Power BI environment so deployment can be made seamless, data refreshes can run properly, and security can be fully implemented What you will learn Connect to data sources using both import and DirectQuery options Use the Query Editor to apply data transformations and data cleansing processes, including learning how to write M and R scripts Design optimized data models by designing relationships and DAX calculations Leverage built-in and custom visuals to design effective reports Use the Power BI Desktop and Power BI Service to implement Row Level Security on your model Administer a Power BI cloud tenant for your organization Deploy your Power BI Desktop files into the Power BI Report Server Who this book is forThis book is for aspiring Business Intelligence professionals who want to get up and running with Microsoft Power BI. If you have a basic understanding of BI concepts and want to learn how to apply them using Microsoft Power BI, this book is for you.
Visa hela texten

Devin Knight Devin Knight a Microsoft Data Platform MVP and the Training Director at Pragmatic Works. At Pragmatic Works, Devin determines which courses are created, delivered, and updated for customers, including 10+ Power BI courses. This is his seventh SQL Server and Business Intelligence book to author. Devin often speaks at conferences like PASS Summit, PASS Business Analytics Conference, SQL Saturdays, and Code Camps. He is also a contributing member to several PASS Virtual Chapters. Making his home in Jacksonville, FL, Devin is the Vice President of the local Power BI User Group and SQL Server User Group (JSSUG). His personal blog can be found at Devin Knight's website. Brian Knight Brian Knight is the owner and founder of Pragmatic Works, and is a serial entrepreneur, starting up other companies. Brian is a contributing columnist at several technical magazines. He is the author of 16 technical books. Brian has spoken at conferences like PASS Summit, SQL Connections, TechEd, SQLSaturdays, and Code Camps. He has received a number of awards from the State of Florida, governor, and press, including the Business Ambassador Award (Governor) and Top CEO (Jacksonville Magazine). His blog can be found at Pragmatic Works website. Mitchell Pearson Mitchell Pearson has worked for Pragmatic Works for six years as a Business Intelligence Consultant and Training Content manager. Mitchell has experience developing enterprise level BI Solutions using the full suite of products offered by Microsoft (SSRS, SSIS, SSAS, & Power BI). Mitchell is very active in the community presenting at local user groups, SQL Saturday events, PASS virtual chapters and giving free webinars for Pragmatic Works. Mitchell can also be found blogging at Mitchellsql website. Mitchell is also the president of the local Power BI User Group in Jacksonville, Florida. In his spare time Mitchell spends his time with his wife and three kids. For fun Mitchell enjoys playing table top games with friends. Manuel Quintana Manuel Quintana is a Training Content Manager at Pragmatic Works. Previously, he was a senior manager working in the hotel industry. He joined the Pragmatic Works team in 2014 with no knowledge in the Business Intelligence space but now speaks at SQL Saturdays and SQL Server User Groups locally and virtually. He also teaches various BI technologies to many different fortune 500 companies on behalf of Pragmatic Works. Since 2014, he has called Jacksonville home and before that Orlando, but he was born on the island of Puerto Rico and loves to go back and visit his family. When he isn't working on creating new content for Pragmatic Works, you can probably find him playing board games or watching competitive soccer matches.