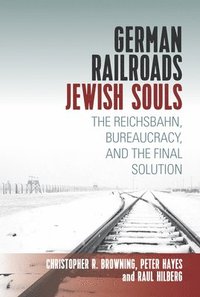 The Reichsbahn, Bureaucracy, and the Final Solution

"This important book unites three prominent scholars tackling crucial questions about German railways and the Holocaust. Two essays from the late, renowned Raul Hilberg investigate their overlooked role in the extermination of the European Jews. They provide groundbreaking investigations into the German railway as the prototype of a bureaucracy and challenge its supposed banality. While Christopher Browning eloquently situates Hilberg's essays within the historical literature, Peter Hayes makes a detailed critique of the common but false belief that the deportation and annihilation of the Jews were more of a priority for the Nazis than the war effort. This question, arising from Hilberg's essays, demonstrates the continued significance of his work today." - Wolf Gruner, author, The Holocaust in Bohemia and Moravia: Czech Initiatives, German Policies, Jewish Responses

Raul Hilberg was the founding scholar of Holocaust studies in the United States and the author of numerous publications, including the classic The Destruction of the European Jews. He taught at the University of Vermont from 1955 to 1991. He passed away in 2007. Christopher Browning is Frank Porter Graham Professor Emeritus at the University North Carolina at Chapel Hill. His books include Ordinary Men: Reserve Police Battalion 101 and the Final Solution in Poland. Peter Hayes is Theodore Zev Weiss Holocaust Educational Foundation Professor of Holocaust Studies Emeritus at Northwestern University. His most recent book is Why?: Explaining the Holocaust.