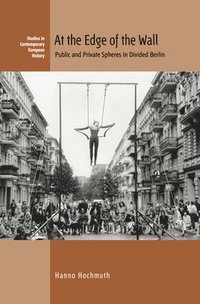 At the Edge of the Wall

av Hanno Hochmuth
Inbunden Engelska, 2021-02-01
1379
Bevaka
Spara som favorit
Ännu ej utkommen – klicka "Bevaka" för att få ett mejl så fort boken boken går att köpa.
Finns även som
Visa alla 1 format & utgåvor
Located in the geographical center of Berlin, the neighboring boroughs of Friedrichschain and Kreuzberg shared a history and identity until their fortunes diverged dramatically following the construction of the Berlin Wall, which placed them within opposing political systems. This revealing account of the two towns during and after the Cold War takes a microhistorical approach to illuminate the broader historical trajectories of East and West Berlin. Merged into a single borough in 2001, they now comprise a neighborhood that bears the traces of these complex histories and serves as an illuminating case study of gentrification, immigration, and the other social processes that continue to reshape Berlin.
Visa hela texten

Praise for the German edition: "A lively, detailed and well-written book... It provides profound and exciting insights into urban life in Friedrichshain and Kreuzberg in the 20th century, and makes a sound contribution to the history of Berlin." * H-Soz-Kult "Historians of cities and urbanization rarely succeed in linking local with broader social history. Hanno Hochmuth's study on the two Berlin working-class districts of Friedrichshain and Kreuzberg masters this methodological challenge by analyzing the specific stories of the two districts as a comparative history of integration." * Sehepunkte "This is a thorough and exemplary study, shedding light not just on the past under discussion, but, by implication, illuminating current developments too. The focus on the years of division allows for a particularly clear profile of general and specific forces that are at work in Berlin's urban environment." * The Year's Work in Modern Language Studies "Overshadowed by the Cold War and global confrontation, the complexity and utter normality of everyday life on both sides of the Berlin Wall have often been overlooked. Hanno Hochmuth's fascinating account of two neighborhoods on the margins of West and East uniquely succeeds in providing a fresh picture of urban society, seen through the eyes of its principal actors: proletarians and pastors, drop-outs and dissidents. Here is the historian as "wall-pecker": The story Hochmuth tells is 20th-century German history in a nutshell, full of insights that also provide background for understanding the current transformation of Germany's capital." * Paul Nolte, Freie Universitat Berlin

Hanno Hochmuth is a historian/research fellow at the Leibniz Centre for Contemporary History in Potsdam (ZZF) and a lecturer at the Free University of Berlin. He is editor, with Paul Nolte, of Stadtgeschichte als Zeitgeschichte: Berlin im 20. Jahrhundert (Urban History as Contemporary History: Berlin in the Twentieth Century) published in 2019 by Wallstein.