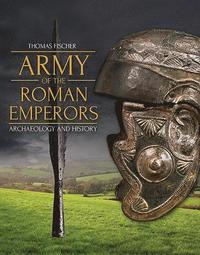 Army of the Roman Emperors

av Thomas Fischer, M C Bishop
Inbunden Engelska, 2019-04-01
537
Köp
Spara som favorit
Skickas inom 2-5 vardagar.
Fri frakt inom Sverige för privatpersoner.
Finns även som
Visa alla 2 format & utgåvor
Compared to modern standard, the Roman army of the imperial era was surprisingly small. However, when assessed in terms of their various tasks, they by far outstrip modern armies - acting not only as an armed power of the state in external and internal conflicts, but also carrying out functions which nowadays are performed by police, local government, customs and tax authorities, as well as constructing roads, ships, and buildings. With this opulent volume, Thomas Fischer presents a comprehensive and unique exploration of the Roman military of the imperial era. With over 600 illustrations, the costumes, weapons and equipment of the Roman army are explored in detail using archaeological finds dating from the late Republic to Late Antiquity, and from all over the Roman Empire. The buildings and fortifications associated with the Roman army are also discussed. By comparing conflicts, border security, weaponry and artefacts, the development of the army through time is traced. This work is intended for experts as well as to readers with a general interest in Roman history. It is also a treasure-trove for re-enactment groups, as it puts many common perceptions of the weaponry, equipment and dress of the Roman army to the test.
Visa hela texten

Thomas Fischer has been Professor for the Archaeology of the Roman Provinces at the Archaeological Institute of the University of Cologne since 1992. He has written widely on Roman Bavaria and was previously Scientific Adviser at the Bavarian State Office for the Preservation of Monuments. Mike Bishop is a specialist on the Roman army, with many publications to his name including the acclaimed and widely used Roman Military Equipment (2006). The founding editor of Journal of Roman Military Equipment Studies, he has also led several excavations of Roman sites.

Translator's Preface Acknowledgements Introduction The state of research The iconographic sources On armament, equipment, and the buildings Basic information on the history and structure of the Roman army Notes to introduction Part I Iconographic sources for the Roman military by Dietrich Boschung 1. Introduction 2. Republican representations 3. The Early Empire: Augustus to Domitian 4. Representations from the middle imperial period 5. Representations from the Tetrarchic period 6. Representations from Late Antiquity Notes to Part I Part II General remarks on the Roman army 1. Introduction 2. A history of research 3. Armament and equipment 4. Find contexts of Roman weapons and equipment parts 5. Legionary or auxiliary equipment? 6. Rank insignia 7. On the reconstruction of Roman fighting methods 8. Comments on the re-enactment scene 9. Forgeries Notes to Part II Part III Costumes, weapons, and equipment of the army from original archaeological finds 1. Infantry 2. Cavalry 3. Artillery 4. Standards and instruments for signalling 5. Awards and decorations 6. Pioneer tools, tents, field pack Notes to Part III Part IV The buildings of the Roman army 1. Introduction 2. Roman camps and forts 3. The most important types of camps and forts 4. Late Roman fortifications 5. Military infrastructure 6. Limites and ripae Notes to Part IV Part V The development periods of Roman military history 1. Introduction 2. Republic 3. The early Imperial period from Augustus to Nero 4. The middle Imperial period from Vespasian to Trajan 5. The middle Imperial period from Hadrian to Septimius Severus 6. The middle Imperial period from Caracalla to the reforms of Diocletian 7. Late Antiquity Notes to Part V Part VI The Roman navy 1. Arming and equipping the marines 2. Bases of the Roman fleets in the Imperial period by Thomas Schmidts 3. Roman warships by Ronald Bockius Notes to Part VI End matter 375 Bibliography Abbreviations Illustration credits Index Persons and peoples Places Subjects