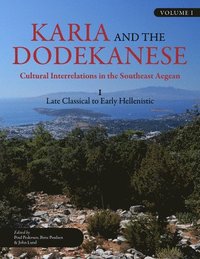 av Birte Poulsen, Poul Pedersen, John Lund
Inbunden Engelska, 2021-01-05
579
Köp
Spara som favorit
Finns även som
Visa alla 2 format & utgåvor
The papers in Karia and the Dodekanese, Vol. I, focus on regional developments and interregional relations in western Asia Minor and the Dodekanese during the Late Classical and Early Hellenistic period. Throughout antiquity, this region was a dynamic meeting place for eastern and western civilizations. Cultural achievements of exceptional and everlasting importance, including significant creations of ancient Greek literature, philosophy, art and architecture, originated in the coastal cities of western Anatolia and the adjoining Aegean islands. In the fourth century BC, the eastern cities experienced a new economic boom, and a revival of Archaic culture, sometimes termed 'The Ionian Renaissance', began. The cultural revival furthered rebuilding of old major works such as the Artemision at Ephesos, the embellishment of sanctuaries and a new royal architecture, such as the Maussolleion at Halikarnassos. The rich cultural revival was initially promoted by the satrapal family of the Hekatomnids in Karia and in particular by its most famous member, Maussollos, whose influence was not confined to Asia Minor, but included the Dodekanese islands Kos and Rhodos. Partly under the influence of the Karian satrapy, a number of cities were founded on a new common urban model in Rhodos, Halikarnassos, Priene, Knidos and Kos. When Alexander the Great conquered the satrapies in western Asia Minor in 334 BC, the culture initially promoted at the satrapal courts was carried on by gifted thinkers, poets and architects, preparing the way for Hellenistic cultural centres such as Alexandria.
Visa hela texten

The diversity of approaches and evidence discussed is consistently stimulating, and the reader gains an insight into the range of projects and methodologies currently being applied to illuminate the entwinement of mainland Anatolia with the communities of the neighbouring islands. * Bryn Mawr Classical Review *

Birte Poulsen is Associate Professor at the Department of History and Classical Studies (Classical Archaeology), Aarhus University. She has been the head of the Danish Halikarnassos team since 2016. Her main research interests are art and archaeology of the imperial period and Late Antiquity with special reference to Asia Minor and Italy. Poul Pedersen is Professor Emeritus at the University of Southern Denmark. He started working in Halikarnassos in 1970 and was head of the Danish Halikarnassos team 1989-2015. His main interests are the topography of ancient Halikarnassos, the architecture of western Asia Minor and Greek Architecture and its impact on later times John Lund is a Senior Researcher in the Danish National Museum, who has studied the finds from Kristian Jeppesen's excavations at the Maussolleion of Halikarnassos intermittently since 1999. The wider implications - economic and otherwise - of Hellenistic and Roman ceramics from the Eastern Mediterranean are central to his research interests.