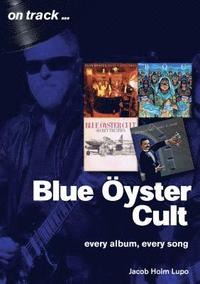 av Jacob Holm-Lupo
(1 röst)  |  Läs 1 recension
Häftad Engelska, 2019-03-07
149
Köp
Spara som favorit
Skickas inom 7-10 vardagar.
Fri frakt inom Sverige över 159 kr för privatpersoner.
Blue OEyster Cult On Track is a song-by-song analysis of the discography of Long Island's greatest sons, the Blue OEyster Cult. Dubbed "the thinking man's heavy metal band" and celebrated by critics, fans and musicians since their debut album in 1972, the band carved a unique path in hard rock history by combining chops, humour, occultism, poetry, jazz chords and pop sensibilities. Best known for their FM radio hits ""(Don't Fear) The Reaper"" and ""Burnin' For You"", Blue OEyster Cult's discography is in fact a treasure trove of fascinating, ever-evolving music by a band that was never afraid to explore, and never had the slightest respect for genre boundaries. The band's influence stretches from seminal metal bands like Metallica to cult act like Current 93 and their music has been heard in movies like ""Scream"" and ""Halloween"" and has been quoted by Stephen King. This book combines the author's analyses of Blue OEyster Cult's songs with insights from band members and people who worked with the band through the years. It is the ultimate companion for a deep dive into the catalogue of a band whose music is both inscrutable, fascinating and rewarding. From the canonized first 4 albums through their controversial 80s output and all the way to their revitalization and comeback in the late 90s, this book treats every era of the band with equal respect.
Visa hela texten

Jacob Holm-Lupo is a Norwegian musician and journalist. He has covered culture, music and movies for magazines since 2001, and he has been a recording artist with, among others, his own progressive rock band White Willow since 1995. He runs his own recording studio from his home on a small island in the Oslo fjord where he lives with his wife, two children, several Italian cars and a dog. He has been Norway's no. 1 Blue OEyster Cult fan since 1984.