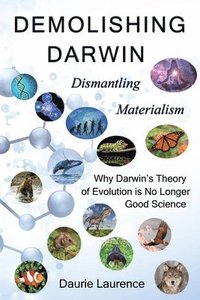 Dismantling materialism: why Darwin's theory of evolution is no longer good science

av Daurie Laurence
Häftad Engelska, 2019-09-30
182
Köp
Spara som favorit
Who are we? What are we? Is there any meaning to our lives? Do you believe in Darwin's famous theory of evolution or in some form of creation? Does it matter? If you think it does, this book will fascinate you. Agree or disagree, you will find lots to think about. Darwin thought `creation' might just be a matter of chance. With enough time and enough luck, mindless particles of carbon and other elements could, gradually, evolve into you and me. Only the physical universe was real and all ideas of the spiritual or supernatural were probably just wishful thinking. This is the materialist view; it is, currently, the mainstream scientific view and it is how I used to think. Like Darwin, and his most famous modern fan, Richard Dawkins, I was a passionate materialist and a committed atheist. Yet, gradually, I began to have my doubts about Darwin and his belief system. Could Life really be just a cosmic accident? Was there any real-world evidence to back up this by now very widespread idea? Could clever minds really emerge from mindless matter by mindless luck? Could we really do away with all notions of the supernatural and the spiritual in our attempts to explain the mysteries of Life and Mind on Earth? This book explores those doubts and it explains, with much evidence, why Darwin's theory has failed to live up to its early promises and claims, yet why, at the same time, many scientists find it hard to admit this. It also explains why his materialist (`only-matter-is-real') belief system is mistaken. Here, in your hands, you hold one of the most accessible yet powerful critiques of Darwin's theory and his philosophy so far written. Grab it, read it. Love it or hate it, it may change your views of reality forever. It will arm you, too, should you wish, with simple but powerful arguments to put to those who, despite the many, not just one or two, critical fails of Darwin's theory, continue to insist that Life and Mind on Earth are nothing special, they are just cosmic flukes. No. Darwin's once intriguing theory is now well past its sell by date and it is beginning to hinder science, not help it. Read on to find out why.
Visa hela texten

Daurie Laurence, a lawyer by training, has a life long interest in philosophy and the deeper dimensions of existence.