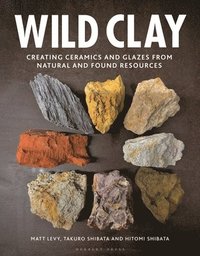 Creating Ceramics and Glazes from Natural and Found Resources

av Matt Levy, Takuro Shibata, Hitomi Shibata
Inbunden Engelska, 2022-10-27
422
Bevaka
Spara som favorit
Tillfälligt slut – klicka "Bevaka" för att få ett mejl så fort boken går att köpa igen.
Finns även som
Visa alla 2 format & utgåvor
The ultimate illustrated guide for sourcing, processing and using wild clay. Potters around the world are taking to the local landscape to dig their own wild clay, discover its unique properties, and apply it to their craft. This guide is the ideal starting point for anyone - from novices, improvers and experts to educators and students - who wants to forge a closer bond between their art and their surroundings. Testing and trial and error are key to finding a material's best use, so the authors' tips, drawn from long experience in the US and Japan (but which can be applied to clays anywhere) provide an enviable head-start on this rewarding journey. A clay might be best suited to sculpture and tile bodies, throwing clay bodies, handbuilding and slab bodies, or simply be applied as a glaze or slip. The specific properties of found materials can create a diverse range of effects and surfaces, or, even when not fired, can be adapted for use as colorful pastels or pigments. Beautiful illustrations and helpful technical descriptions explain the formation of various clays; how to locate, collect and assess them; how to test their properties of shrinkage, water absorption, texture and plasticity; the best ways to test-fire them; and how to adapt a clay's characteristics by blending appropriate materials. From prospecting in the field to holding your finished product, there is helpful advice through every stage, and a gallery of work by international potters who have embraced the clays found around them.
Visa hela texten

This beautifully illustrated guide is the ideal starting point for those wanting to forge a closer bond between their art and their natural surroundings. * Ceramics Now * Finding your own clay-especially for use as a glaze material or to augment a commercial clay body-is increasingly popular and this book is a guide to finding, testing, and using wild clay. * The Studio Manager * A fascinating guide to finding your own clay and creating your own glazes. Billed as ideal starting point for novices, experts, and everyone in between, this is an excellent addition to the experienced ceramicist's library, but also to those new to the art. * Book Riot *

Matt Levy has a strong connection to the geology around him, which is a constant driving force in his practice. He is motivated by what can be found in the soil beneath his feet and the rocks he finds in the landscape. He lives in St. Paul, Minnesota, sourcing local clay from Lake Superior and the Mississippi River Basin. Hitomi Shibata is a Japanese native ceramic artist. She studied Fine Art & Craft at Okayama University before working as a potter in the village of Shigaraki, and then moving to the USA to study ceramics at the University of Massachusetts-Dartmouth. She later set up a permanent pottery in Seagrove, North Carolina, where she and her husband build wood kilns. Takuro Shibata is a Japanese native ceramic artist. He studied Engineering in Applied Chemistry at Doshisha University, but then took up an apprenticeship at a pottery studio in Shigaraki, Japan. After visiting the USA in 2001, many opportunities came up to join ceramic art programs, and in 2005 he accepted the position of director at STARworks Ceramics, moving to Seagrove with his wife.