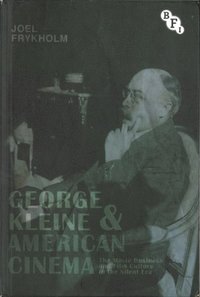 The Movie Business and Film Culture in the Silent Era

av Frykholm Joel Frykholm
E-bok (EPUB - DRM), Engelska, 2019-07-25
929
Ladda ned
Spara som favorit
Laddas ned direkt
Läs i vår app för iPhone, iPad och Android
George Kleine was a New York City optician who moved to Chicago in 1893 to set up an optical store. In 1896 he branched out and began selling motion picture equipment and films. Within a few years he becameAmerica's largest film distributor and a pivotal figure in the movie business. In chronicling the career of this motion picture pioneer including his rapid rise to fame and fortune, but also his gradual downfall after 1915 as the era of Hollywood began Joel Frykholm provides an in-depth account of the emergence of the motion picture business in the United States and its development throughout the silent era. Through the lens of Kleine's fascinating career, this book explores how motion pictures gradually transformed from a novelty into an economic and cultural institution central to both American life and an increasingly globalised culture of mass entertainment.
Visa hela texten