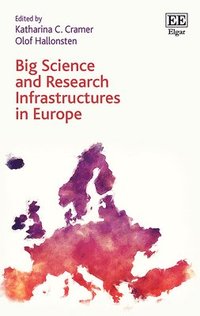 av Katharina C Cramer, Olof Hallonsten
Inbunden Engelska, 2020-08-14
1211
Köp
Spara som favorit
Skickas inom 7-10 vardagar.
Fri frakt inom Sverige för privatpersoner.
This thought-provoking book expands on the notion that Big Science is not the only term to describe and investigate particularly large research projects, scientific collaborations and facilities. It investigates the significant overlap between Big Science and Research Infrastructures (RIs) in a European context since the early twenty-first century. Contributions to this innovative book not only augment the study of Big Science with new perspectives, but also launch the study of RIs as a promising new line of inquiry. Chapters testify to a generational shift that is taking place in this field, amending and complementing prior analyses of Big Science. Advancing our knowledge, this interdisciplinary book explores how Big Science and RIs can be categorized, how the politics around them can be understood, and how they relate to the surrounding science and research policy landscape of Europe. Big Science and Research Infrastructures in Europe will be of value to students and scholars interested in science and innovation policy across sociology, economics, management and political science. Policymakers, science administrators and operators of RIs will also benefit from the critical insights provided.
Visa hela texten

'This book skillfully updates the literature on Big Science, containing newer perspectives on the history, sociology, and politics of research infrastructures. The interdisciplinary yet neatly integrated contributions show how "big organizations, big machines, and big politics" co-construct Europe and its research infrastructure.' -- Cyrus Mody, Maastricht University, the Netherlands 'This is an ambitious and effective coverage of the network of European Big Science institutions. It is a comprehensive and insightful work that takes us behind purely scientific scenes to examine the policies that govern large European science projects, the legal frameworks that shape them, the funding that supports them, and the alliance-building that made them possible. The chapters are comprehensive, and reveal the political and commercial forces at work in the expanding network of European scientific institutions, as well as their crucial role in European integration and multinational cooperation.' -- Robert P. Crease, Stony Brook University, US 'This book, in a comprehensive and appealing way, tells a story of large scientific facilities dating back to the early Cold War and reaching the current era of integrated Research Infrastructure eco-systems. Going from a competition between the United States and the Soviet Union to scientific cooperation among European states to tackle the grand challenges such as key health, environmental or quality of life problems, the book provides an evolutionary picture based on deep understanding and a solid analytical framework. The authors have done magnificent work on a topic that has been so far mostly scattered in diverse policy reports. A great analysis for anyone dipping their toe in Big Science or Research Infrastructures.' -- Jan Hrusak, ESFRI Chair and The Czech Academy of Sciences, Czech Republic