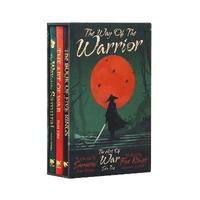 The Way of the Warrior

Each a best-selling title in its own right, these three classic Far Eastern texts are about much more than war and being a warrior, including ideas of leadership, virtue and disciple which remain relevant to conduct in business and in life today, and giving them a much broader appeal.
Visa hela texten

Inazo Nitobe (1862-1933) was scholar and an educator. After studying at John Hopkins University he maintained his links with the US and tried through his academic career 'to become a bridge across the Pacific'. He wrote Bushido: The Soul of Japan, published here as The Way of the Samurai, in 1899 and the book established his reputation in the West. Miyamoto Musashi (1584-1645) was born into a samurai family in Harima province. His mother died soon after his birth, so he was raised by his step-mother and then his uncle, a monk from the Shoreian temple. While staying with his uncle, he was taught Zen Buddhisma and basic reading and writing. He had his first duel at the age of thirteen and went on to have 59 more, claiming never to have lost a single one. He completed his influential book on swordsmanship in May 1645, the year he died. Sun Tzu was an accomplished general and strategist in China who lived during the Spring and Autumn period (771-485 BC). His treatise The Art of War is the most famous military text ever written and remains influential to this day.

The Way of the Warrior contains the following volumes: The Way of the Samurai by Inazo Nitobe The Art of War by Sun Tzu The Book of Five RIngs by Miyamoto Mushashi