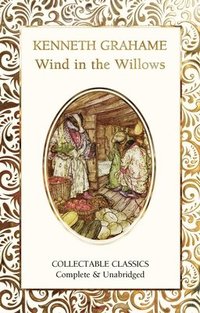 The Wind in The Willows

av Kenneth Grahame
Inbunden Engelska, 2021-09-14
112
Köp
Spara som favorit
Finns även som
Visa alla 8 format & utgåvor
A stunning new edition with deluxe cover treatments, ribbon markers, luxury endpapers and gilded edges. The unabridged text is accompanied by a Glossary of Victorian and Literary terms produced for the modern reader. Kenneth Grahame's treasured and perennially popular The Wind in the Willows follows the adventures of Mole, Rat, Toad and Badger as they spend their time 'simply messing about in boats', getting lost in the Wild Wood and getting Toad out of scrapes. The endearing characters, evocatively idyllic setting of the gentle Thames Valley and the message of friendship make this an enduringly heart-warming tale. The FLAME TREE COLLECTABLE CLASSICS are chosen to create a delightful and timeless home library.
Visa hela texten

Though born in Edinburgh, Kenneth Grahame (1859-32) moved, along with his siblings, to Cookham Dean, Berkshire, at the age of 5 to live with his grandmother after his mother died and his father (who had a drink problem) was unable to care for them. It is here that Grahame was introduced to the riverside and boating, no doubt providing inspiration for the evocative setting of the bedtime stories that he later told his son Alastair and which led to his famous novel, The Wind in the Willows (1908). Judith John (glossary) is a writer and editor specializing in literature and history. She has worked as an editor on major educational projects, including English A: Literature for the Pearson International Baccalaureate series. Judith's major research interests include Romantic and Gothic literature, and Renaissance drama.