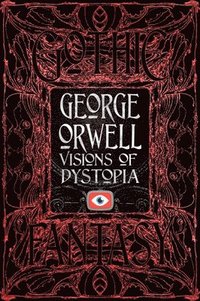 av George Orwell
Inbunden Engelska, 2021-01-12
243
Köp
Spara som favorit
Orwell is most well-known for his two famous novels Nineteen Eighty-Four and Animal Farm, but their dystopian vision was informed by observations of poverty in England (Down and Out in Paris' and London and Road to Wigan Pier), and disillusion with political and national events of the 1930s and 1940s. Homage to Catalonia chronicled his experience of the Spanish Civil War and formulated his revulsion against totalitarianism, highlighted in his subsequent novels. This new collection (edited and with a new introduction by Professor Richard Bradford, and a foreword by Whitbread Prize winner D.J. Taylor) brings together Orwell's two celebrated novels and some of his seminal nonfiction (extensive extracts from Down and Out in Paris and London and The Road to Wigan Pier, and the whole of Homage to Catalonia), along with some brief extracts of pertinent work by Jack London, who also explored totalitarianism in The Iron Heel (fiction), and the Russian dissident Yevgeny Zamyatin whose own work We (1921) offers a strong warning about a dystopian police state. A new addition to the Flame Tree deluxe Gothic Fantasy series on classic and modern writers, exploring origins and cultural themes in myth, fable and speculative fiction. The Flame Tree Gothic Fantasy, Classic Stories and Epic Tales collections bring together the entire range of myth, folklore and modern short fiction. Highlighting the roots of suspense, supernatural, science fiction and mystery stories, the books in Flame Tree Collections series are beautifully presented, perfect as a gift and offer a lifetime of reading pleasure.
Visa hela texten

George Orwell, the pseudonym of Eric Arthur Blair, was born in Bengal, India, in 1903. He was educated at Eton, became a policeman in Burma but suffered and studied poverty. His great works, Animal Farm and Nineteen Eighty-Four, are a product of his hatred of totalitarianism. His legacy of writing and political thought is much admired today. Richard Bradford (Introduction, and Editor) is Research Professor at Ulster University and Visiting Professor at Avignon University. He has held posts at Oxford, the University of Wales and Trinity College, Dublin, and has published thirty-five books. Ten of these are literary biographies, including lives of Kingsley Amis, Philip Larkin, Alan Sillitoe, Martin Amis, Ernest Hemingway, John Milton and most recently the widely-acclaimed Orwell: A Man of Our Time (2020). His life of Patricia Highsmith will appear on the centenary of her birth in 2021. D.J. Taylor (Foreword) is the author of Orwell: The Life, which won the Whitbread Biography Prize in 2003, as well as the acclaimed biography Thackeray (1999). The most recent of his eleven novels are The Windsor Faction (2013), joint winner of the Sidewise Award for Alternate History, Derby Day (2011), At the Chime of a City Clock (2010), Ask Alice (2009) and Kept: A Victorian Mystery (2006). Also well known as a critic and reviewer, David has published books on British fiction and writes for many UK and US newspapers and publications.