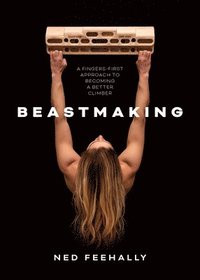 A fingers-first approach to becoming a better climber

av Ned Feehally
Häftad Engelska, 2021-09-16
297
Köp
Spara som favorit
Finns även som
Visa alla 1 format & utgåvor
'When it comes to training for climbing, you are your own experiment.' Beastmaking by Ned Feehally is a book about training for climbing. It is designed to provide normal people - like you and me - with the tools we need to get the most out of our climbing. It is written by one of the world's top climbers and a co-founder of Beastmaker. It features sections on finger strength, fingerboarding, board training, mobility and core, and includes suggested exercises and workouts. There are insights from some of the world's top climbers, including Alex Honnold, Shauna Coxsey, Adam Ondra, Alex Puccio and Tomoa Narasaki. Free from jargon, it is intended to provide enough information for us to work out what we need to train, and to help us to train it.
Visa hela texten

Ned Feehally is one of the world's top climbers and co-founder of Beastmaker, which manufactures wooden fingerboards and climbing training apparatus. He has been climbing for over twenty years, is a three-time British bouldering champion, has competed in world cup finals, and has been at the heart of pushing climbing standards in the UK over the last ten years. He is obsessive about data-led training but passionate about communicating what works and what doesn't to regular climbers, which is what led him to write Beastmaking. He has climbed multiple Font 8cs, and in 2017 he climbed Trust Issues in Rocklands on his first attempt, joining a very small group of climbers to have flashed Font 8b+. In 2020 he made the first ascent of The Boss, one of the hardest problems on gritstone. He lives in Sheffield with his partner, Shauna Coxsey.