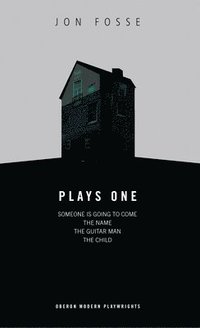 Someone is Going to Come Home, the Name, the Guitar Man, the Child

av Jon Fosse
Häftad Engelska, 2002-10-01
223
Köp
Spara som favorit
Skickas inom 5-8 vardagar.
Gratis frakt inom Sverige över 159 kr för privatpersoner.
"Includes the plays Someone is Going to Come, The Guitar Man, The Name and The Child In Someone is Going to Come the two of them want to be together, just the two of them, so they leave the city and buy a remote house by the sea. But is it possible to do what they want to do? Won't somebody come? Surely someone will come. The Guitar Man is a poignant monologue in which a busker sings songs to an audience that is always on the move, always passing him by. The Name (winner of the Ibsen Prize in Norway) tells the story of an estranged family forced to live under one roof. When a pregnant girl and the father of the child have nowhere to live, they move into her parents' house. But the parents have never met the father-to-be, and don't yet know about the pregnancy. In The Child a man and a woman find each other in a bus stop on a rainy night. They hold each other close. They rent an old house out of town. The woman becomes pregnant. But the child is too small to survive. In these four varied plays Jon Fosse's unique linguistic style, at once poetic and naturalistic, magnifies the love and pain of ordinary people seeking to live their lives."
Visa hela texten

"Jon Fosse's work includes novels, poetry, essays and books for children. He is one of the most produced playwrights in Europe and his plays have been translated into more than forty languages. Oberon Books publishes Plays One (Someone Is Going to Come, The Name, The Guitar Man, The Child), Plays Three (Mother and Child, Sleep my Baby Sleep, Afternoon, Beautiful, Death Variations), Plays Four (And We'll Never Be Parted, The Son, Visits, Meanwhile the Lights Go Down and Everything Becomes Black), Plays Five (Suzannah, Living Secretly, The Dead Dogs, A Red Butterfly's Wing, Warm, Telemakos, Sleep), Nightsongs, The Girl on the Sofa and I Am The Wind. Fosse was made a Chevalier of the Ordre national du Merite of France in 2007 and received The International Ibsen Award in 2010. Gregory Motton Gregory Motton's plays include ""A Message for the Broken Hearted"", ""The Terrible VOice of Satan"", ""Looking at You (revived) Again"", ""Lazy Brien"", ""Ambulance"" and ""Downfall"", all published by Oberon."