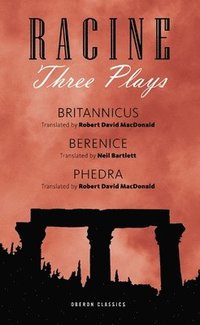 av Jean Racine
Häftad Engelska, 2010-08-01
209
Köp
Spara som favorit
Skickas inom 7-10 vardagar.
Fri frakt inom Sverige för privatpersoner.
This work contains three masterpieces by one of the most important French dramatists of the 17th century. "Berenice" is a tale of love and personal happiness in conflict with public duty. "Phedre" concerns a princess with an overwhelming infatuation with her stepson. "Britannicus" lays bare the relationships at the heart of power as a world slips into moral chaos. These new versions by two of the country's most distinguished director-translators prove that Racine is far from untranslatable; they offer blisteringly effective poetry, urgent plotting and powerhouse roles for both actors and actresses.
Visa hela texten

"Jean Racine (1639-99) is widely regarded as the greatest seventeenth-century Frenc tragedian, both observing and transcending the conventions of classical tragedy. Neil Bartlett is one of his generation's most respected and innovative theatre directors. His highly individual translations of French and German classical theatre, and charcteristically theatrical adaptations of Dickens, most of them originated while he was Artistic Director of the Lyric Hammersmith in London, have been played around the world. His plays have premiered at the Royal Court, at the Manchester International Festival and at the National Theatre in London. Robert David MacDonald (1929 - 2004) was born in Elgin, Scotland. After originally training as a musician, he worked as a Director, Playwright and Translator. As an Assistant Director, he worked at both the Glyndebourne Opera Festival and for the Royal Opera House. In 1971, he became Co-Artistic Director of the Glasgow Citizens Theatre, where he directed fifty plays and wrote fifteen for the venue before his retirement in 2003. The plays that he wrote for the Glasgow Citz include The De Sade Show (1975), Chinchilla (1977), Summit Conference (1978), also seen in the West End with Glenda Jackson and Gary Oldman, A Waste of Time (1980), Don Juan (1980), Webster (1983), Britannicus (2002) and Cheri (2003). As a translator, MacDonald translated over seventy different plays and opera from over ten different languages including The Threepenny Opera, Tamerlano, Die Entfuhrung aus dem Serail, The Marriage of Figaro, Orpheus and The Human Voice, Conversation at Night, Shadow of Angels, The Balcony, The Government Inspector, Tasso, Faust I and II, Ibsen's Brand and Hedda Gabler, Lermontov's Maskerade, Lorca's The House of Bernarda Alba, Moliere's School for Wives and Don Juan, Pirandello's Enrico Four, Racine's Phedre, Schiller's Mary Stuart, The Maid of Orleans and Don Carlos, Chekhov's The Seagull, Verne's Around the World In Eighty Days, Wedekind's Lulu and Goethe's Clavigo. His adaptation of War and Peace ran for two seasons on Broadway and received an Emmy award when shown on U.S television. The Finborough Theatre has previously presented Robert David MacDonald's versions of Rolf Hochhuth's Soldiers (2004) and The Representative (2006) "