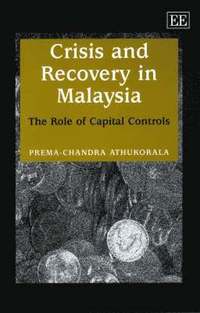 Crisis and Recovery in Malaysia

The Role of Capital Controls

av Prema-Chandra Athukorala
Inbunden Engelska, 2001-06-01
1159
Köp
Spara som favorit
Skickas inom 10-15 vardagar.
Fri frakt inom Sverige för privatpersoner.
Finns även som
Visa alla 1 format & utgåvor
In the light of the Malaysian experience during the Asian financial crisis, this book examines the role of international capital mobility in making countries susceptible to financial crises and the use of capital controls as a crisis management tool. Malaysia provides an interesting case study of this subject given its significant capital market liberalisation prior to the onset of the crisis, and its fundamental shift in crisis management policy in September 1998. The prime focus of the book is on Malaysia's radical policy decision to pursue an independent recovery path, cut off from world markets by a system of capital control, as a viable alternative to the conventional market centred approach. The analysis suggests that, against the initial dire predictions of many economists, the capital controls have actually played a crucial supportive role in crisis management. Whether the controls have played a special role in delivering a superior recovery outcome in Malaysia compared to IMF-program countries remains a point of contention. However, there is strong evidence to suggest that this pragmatic policy choice was instrumental in achieving recovery, while minimising potential economic disruption and related social costs. The book provides an integrated view of the modalities and working of the capital-control based recovery package in the context of a comprehensive survey of macroeconomic management in Malaysia and from a comparative East Asian perspective. It will prove to be of great value to development macroeconomists, monetary and financial economists and students of Malaysian and East Asian development.
Visa hela texten

'. . . essential reading for those interested in capital market liberalisation or economic policy in Southeast Asia.' -- M. Ramesh, Asian-Pacific Economic Literature 'This book makes an invaluable contribution to the growing interest in the 1997-98 Asian crisis and its policy responses by focusing specifically on the experience of Malaysia. . . . Overall, the book provides an important contribution to the debatable subject of capital controls. It does not focus only on Malaysia as an isolated case, it also brings other crisis-hit countries into the picture. That approach is illuminating and makes the book accessible to a broad range of readers.' -- Mansor H. Ibrahim, Canadian Journal of Development Studies '. . . this book is a major pioneering work on the effectiveness of capital control in Malaysia. The arguments are well supported by empirical data and the book is informative, analytical and well written. It is certainly a significant contribution to the ongoing debate on a controversial and delicate subject.' -- Lai Yew Wah, Journal of Malaysian Studies '. . . the Malaysian experiment is certainly one of the most successful attempts to buck IMF orthodoxy anywhere in the developing world in recent years, and, as such, many students and policymakers will wish to study it. This careful and scholarly monograph is an excellent place to start. . .' -- Anne Booth, Journal of Development Studies 'Professor Athukorala tells a fascinating story of one of the most successful economies in the world economy in the last decades, from the inception of its liberalisation policy to its radical decision to pursue an independent recovery path after the 1997 Asian financial crisis. This is case-study economics at its best. The book is superbly organised, meticulously researched and clearly written; a treat for professional economists and policymakers alike.' -- Tony Thirlwall, University of Kent, UK 'Prema-chandra Athukorala has written an admirably clear, objective and balanced analysis of the reasons for the economic crisis in Malaysia and the role of capital controls in its recovery. He shows how Malaysia generated its own vulnerability to the contagion from the Thai collapse, but also makes excellent use of disaggregated data to demonstrate that the Government's adoption of capital controls worked. Adjustment was achieved at lower social cost than without capital controls. As far as crisis management is concerned the orthodox critics were confounded. But Athukorala has his reservations that some of the rescue operations may have sustained inefficient and weakly financial institutions and may represent a hazard for long term prosperity.' -- Alasdair I. MacBean, Lancaster University, UK 'Malaysia is one of the great success stories of the last quarter of the twentieth century. From 1988 it had one of the highest growth rates in the world, and it managed to maintain ethnic peace in an undoubtedly difficult environment. Recently it has provided a major laboratory experiment of the use of capital controls at a time of crisis when a country is highly integrated in the world capital market. This excellent book presents the first careful analysis of the nature and effects of these controls, as well as providing a thorough background of how the Asian crisis played out in Malaysia.' -- W.Max Corden, The Johns Hopkins University, US

Prema-chandra Athukorala, Professor of Economics, Arndt-Corden Department of Economics, Crawford School of Public Policy, Australian National University, Australia and a Fellow of the Academy of Social Sciences in Australia